On Sunday Chris and I had walked around briefly around the Gardens without anything much in mind, but now I can’t seem to go anywhere without being distracted by bees.

We saw a huge queen American Bumble Bee Bombus pennsylvanicus, she was magnificent,  a few honey bees and  the wonderful green eyed carpenter bee, so today I took the morning off to go for a slower meander around to see what was happening.

The Gardens are slowly recovering from the terrible winter damage but many old friends have died and all the lovely frangipanis are withered stumps.
I wonder if they will be able to regenerate? It’s clear that things are a good month behind here as Chris and I were able to eat loquats from the tree.. last year they were ripe in  March.
There were some bees..not that many, but quite a few honey bees on the roses.. and then these. (The camera and its operator are not the best but it is a nice record of a sunny morning in May.)
On exactly the same patch of salvia,  a smaller Bombus pennsylvanicus the only bumble bee I saw today. 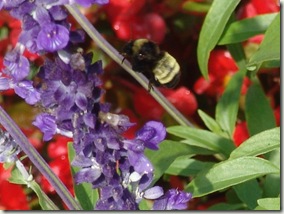 On Bulbine frutescens (also known as Bulbinella, Snake flower, Cat’s tail, Burn jelly plant) there were quite a few of these tiny bees, they seemed to be grey with a stripy abdomen,  very fast and difficult to photograph.
This was the best of many blurred or just empty frames! The plant itself is very interesting as it’s an old medicinal plant used for  skin conditions.. hence the name “burn jelly” 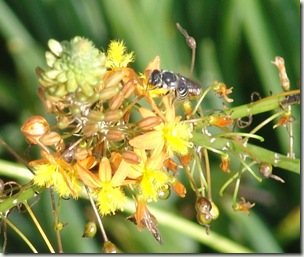 Next, resting  on a blackberry leaf was this little bee. Pollen baskets full and with blue eyes. 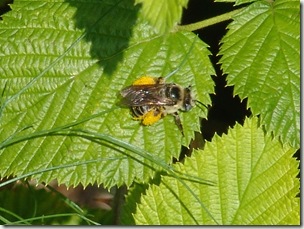 By another patch of salvia was this bee which I am assuming is a Megachile and the nearest match I can find is the Megachile lanata.

It was stopping every now and then for a brush up. It had very distinctive cream hairs on its face and was more gingery than any Megachile I have seen before. 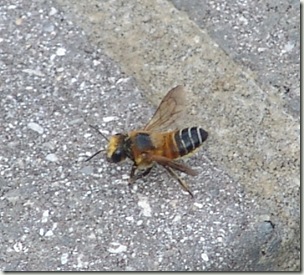 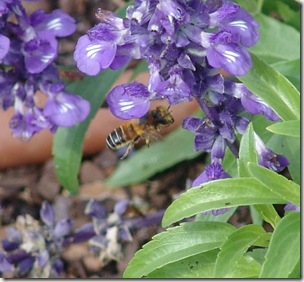 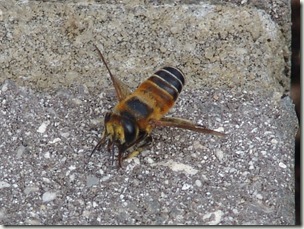 and then gorgeous old green eyes,  the gentle Southern Carpenter bee Xylocopa micans who was in exactly the same place as on Sunday too, on a pretty arching shrub which Joel thinks is a verbena of some sort. Its eyes are really extraordinarily huge! 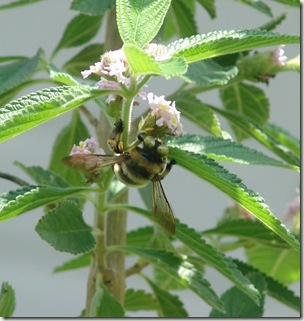 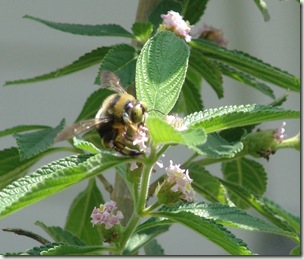 Elegant wasps were floating around the bushes and flowers.

Here is a Black and Yellow Mud Dauber Sceliphron caementarium feeding on the fennel. Wasps are so much easier to photograph than bees! 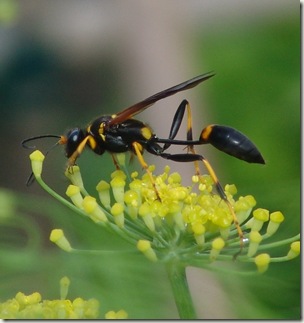 There are dragonflies galore which all seem to have come out just now.
Sometimes they will stay still enough  for even my slow camera to get a shot. The most spectacular ones are the saddlebag dragonflies,  which are huge and whose dark wing bases making their body size appear enormous. 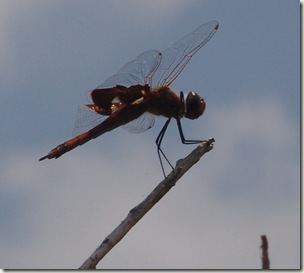 then there are the little skimmers with the spotted wings 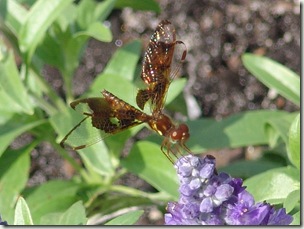 I will try to get some positive  ID on the bees.. Bugguide is my friend!