This is a self-indulgent, heady combination of people I love! Beautiful words and images arising from sensitive, accurate observations and appreciation of the natural world.  Shakespeare and Beatrix Potter, creators of magical worlds and Edmund Dulac and Arthur Rackham, the very best of fairy illustrators.

Shakespeare’s bees I am an unashamed fan of both “A Midsummer Night’s Dream” and “The Tempest”. During my blog break, in between trying to organise things for the exhibition I went back to look at these two wonderful plays and their mention of bees.

When I was a child I was fascinated by my grandmother’s tiny house which was full of books. There were many small cheap editions of the classics which included the easy reader version of  Lamb’s Tales of Shakespeare where I first encountered these magical fairie worlds.

There are many references to bees in Shakespeare but probably the most famous is Ariel’s song from the Tempest Act Five, Scene 1

“Ariel:          Where the bee sucks, there suck I,
in a cowslip’s bell I lie;
There I couch, when owls do cry.
On a bat’s back I do fly
after summer merrily, merrily shall I live now,
under the blossom that hangs on the bough.
Shall I live now “

Edmund Dulac’s illustration of Ariel living his freedom is sublime,  in the quality of the botanical observation and the spirit of the words and of course the virtuoso handling of watercolour. 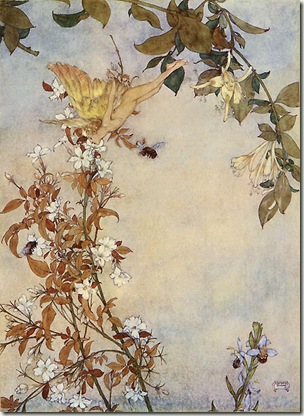 In “A Midsummer Nights Dream”  Titania requests that the fairies look after her new love the Donkey headed Bottom,

“Be kind and courteous to this gentleman;
Hop in his walks and gambol in his eyes;
Feed him with apricocks and dewberries,
With purple grapes, green figs, and mulberries;
The honey-bags steal from the humble-bees,
And for night-tapers crop their waxen thighs
And light them at the fiery glow-worm’s eyes,”

Later in ACT IV, Scene 1 Bottom revels in his new status and requests of Cobweb:

“Mounsieur Cobweb, good mounsieur, get you your
weapons in your hand, and kill me a red-hipped
humble-bee on the top of a thistle; and, good
mounsieur, bring me the honey-bag.”

Here is the incomparable Arthur Rackham’s illustration for the passage: 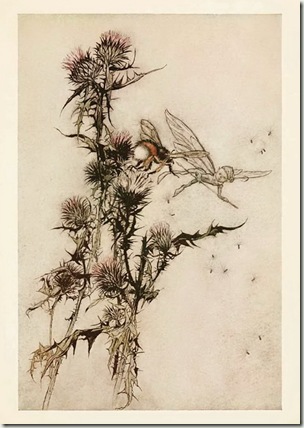 The “red hipped Humble Bee” in question which Shakespeare refers to might well be Bombus lapidarius as he refers in other plays to the “red tailed Humble Bee”.

Rackham’s interpretation shows a white tail, which is sometimes the case with both lapidarius and lucorum but probably not to that extent. However I am not one of the joyless ones who like to niggle, I just revel in the gorgeous pen drawing of the thistle.
There was an understanding in Shakespeare’s time that bees collected both wax and honey from flowers but he would know that bumble bees carry honey in a separate honey stomach, more than the honey bee due to their size.

In fact on a rather gruesome note, Gilbert White in Letter XXVII To The Honourable Daines Barrington December 12, 1775, mentions a simple boy who would eat bees for their honey.
It’s a very curious passage written in a matter of fact way but not without some sympathy for the boy’s condition. You can read more here in Project Gutenberg Etext of The Natural History of Selborne.

But away from all that to the charm and beauty of Beatrix Potter Anyone who knows anything about her is already aware that she was a very fine natural history observer and painter as well as the writer and illustrator of her wonderful books.
Here is a set of drawings including some bees. see the beautiful big aforementioned Bombus lapidarius on the left. 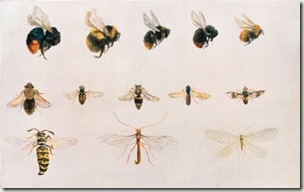 “She used a fine, dry brush to define meticulously and minutely the anatomy of even the most delicate specimens. Fascination with scientific accuracy underpins Potter’s artistic technique, a bee, beetle, butterfly, ladybird and spider enjoy supporting roles in The Tale of Mrs Tittlemouse. Potter observed them, and her ‘ most terribly tidy particular little mouse’ with astonishing attention to detail.”

And here, indeed is the wonderful Mrs Babbitty Bumble from the Tale of Mrs Tittlemouse.
Poor Mrs Tittlemouse who only wants a neat and tidy house is beset by bugs..and the ultimate is finding the mossy nest of bumblebees in her larder.

“ I am not in the habit of letting lodgings, this is an intrusion”

she says and enlists the help of the muddy footed toad Mr. Jackson who will do anything for a little dish of honey! 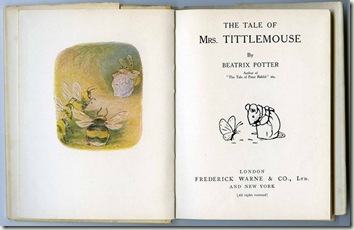 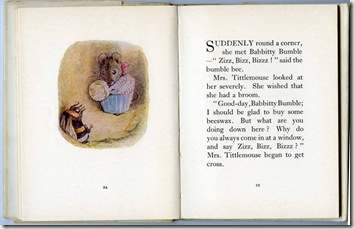 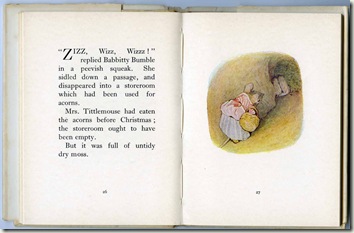 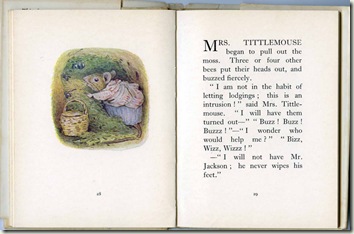 Mr Jackson it appears eats one of the other unwelcome guest hiding in the plate rack, ( a woodlouse I think ) but draws the line at the Bumble bee. About to take a bite he puts her down “I do not like bumble bees, they are all over bristles” 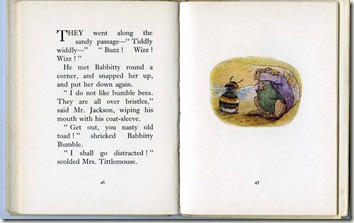 But he does help  Mrs Tittlemouse  to restore order and is rewarded with acorn cups of honey.. and all is well.. but I think the bumblebees had to find another home!

You can read the spreads yourself at Childrensbooksonline , but these, above, are taken from on old book belonging to Chris.

We only have a few things in the apartment here and Chris travels very light, but there are 3 Beatrix Potter books in the book case, they were his as a child and read by his children too.

There is nothing nicer than an old book passed down from generation to generation is there? I appreciate a fine pristine first edition  but I do love old books, love to see their previous owners names, love the grubby thumbed pages of much loved and well used favourite volume.

I recently picked up an old rather tatty volume of Sladens “Humble bee” which I had ordered from the local library. The librarian apologised for the condition it was in.. “But” I said, “it’s the contents .. it’s all about the contents .. isn’t it?”
It’s exactly how I feel about people too..

A final thought for all you beekeepers this coming year, old and new.. May your “singing masons be busy building roofs of gold”  Shakespeare’s Henry V, Act 1 Scene 2.