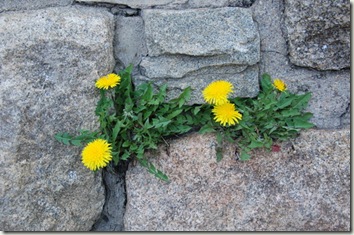 Photo by Ernita at Shutterstock.com

The Enemy of my Father

I used to earn my pocket money by gardening. It left me with a delight in growing things, a love of digging, a hatred of mowing and a passion for weeding.
This was instilled in me by my father who, although a passionate gardener was adamant that things had their place and in our garden, then surrounded on every side by fields, ancient grazing, hedges, dykes, and flower filled verges ( yes this is some time ago) the place of the “weeds” was very firmly on the other side of the straggly wire fence.

My father battled with everything in the garden, with mice, birds, squirrels, this pest, that pest , this canker, that whitefly, the insidious “Yorkshire Fog” and creeping “twitch”, but his greatest foe was, and still is, the Dandelion.

At 92 he is now incapable of much weeding, but if the CIA really could have floored a goat with one stare, my father would have been lining up for training, so that he could march around the garden glaring at dandelions, in his endless and hopeless campaign to eradicate these cheery yellow interlopers.

He wasn’t a great user of chemicals mostly because he was thrifty and, in his eyes, hard work can accomplish most things, so I have fond memories of crowbar-ing flagstones and lifting patches of lawn and excavating huge holes, deep enough to find bedrock, in our relentless search for the dread taproot.

On my last trip home I was ordered to weed the flagged patio. Dandelions love these little narrow gaps between stones don’t they? No hoe or fork or knife can do much more than behead them, which is as nothing to a dandelion. I

am sure that one day soon my father will glance out of the French windows, see a new, dancing, mocking dandelion thumbing its nose at him from between stones and die of apoplectic rage.

At first I just did a bit of beheading but, if my father’s hearing is non existent his eyesight is excellent, and I was told I had been sloppy, and sent back out to do a proper job. I was reluctant but they had to go, I just can’t be held responsible for my father’s early demise (if at 92 that is possible) can I? 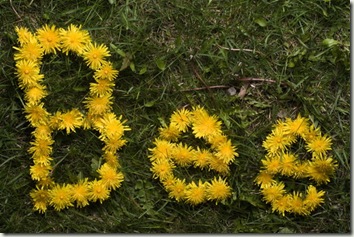 Bee” in Dandelions by Duncan de Young at Shutterstock

The Friend of Bees

Despite my tentative pleading of the benefits of weeds, my fathers position remains firm. I have learnt to love them, especially dandelions and I have said before on the blog that one very good way to help bees is to stop weeding, or at least have a weedy wild patch. (As I write this I feel waves of stunned and pitying disapproval winging their way from the UK.. “my daughter has completely lost her mind”.. he will be thinking).

I am currently drawing some of the tiny little solitary bees, and they love the dandelion family.. as do all bees. The importance to bees of this pretty, if tenacious, weed cannot be over emphasised.

Their long flowering season and rich nectar and pollen source, gives an early boost to emerging bees and keeps them going in the autumn too.  Some different bees enjoying dandelions; 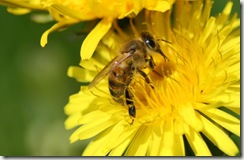 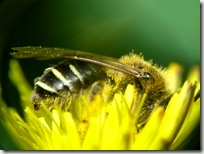 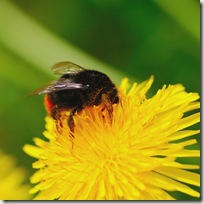 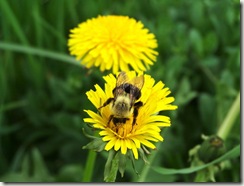 Photos Hway Kiong Lim and Laurie Barr …and of course they are not just for the bees; 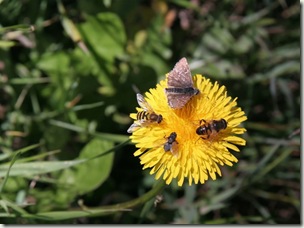 Photo, Titus Manea All the above photographs are reproduced with the very kind permission of Shutterstock.com…

A Childhood Sweetheart and Artist’s Inspiration

I am sure you all know the other benefits of dandelions.. it would be a dull and sad child who has never blown a dandelion clock or made a little salad for an apprehensive parent, and the internet is full of excellent info and enthusiasts!
But my blog friend Curtiss Clark who aside from running the Newtown BEE  newspaper (Hmm, I wonder how we met 🙂 )  keeps a lovely blog and back in 2006 wrote this; “In Defense of Dandelions” .

It’s as thoughtful and delightful a piece as any dandelion lover could wish for. He extols their virtues, reminds us of carefree days and wants to restore the place they had in our hearts when we were children:

“We are beaten year after year by the botanical equivalent of a smiley face. For certain scowley-faced green-lawn-obsessive guys I know, it’s infuriating. Sometimes our own ideas ruin the world for us. While we are feverishly poisoning dandelions and pulling them out by the roots, we are often simultaneously enriching the soil of garden beds so that we may plant asters, or daisies, or marigolds, or sunflowers, or zinnias, all of which are first cousins of the dandelion in the family Asteraceae.

It’s a lovely piece Curtiss! (Which I may read to my father when I am home in June, if he has survived the spring emergence.)   The humble Dandelion has inspired many artists and designers.. hundreds of us appreciate its beauty, intricacy and mystery, in every part of its life cycle, especially those gorgeous seed heads.  Here are two 2 favourite images of mine which go a little beyond the cheery yellow. 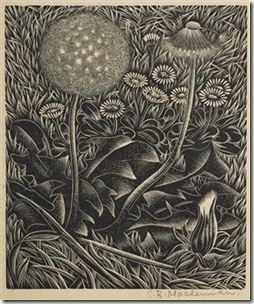 A beautiful intricate Stewart Maclennan, woodengraving made in 1940
from the Museum of New Zealand here.

I am very fond of his work, as I am of Charles Burchfield who I have written about before. Here is a late work Dandelion Seed Heads and the Moon (1961-65) 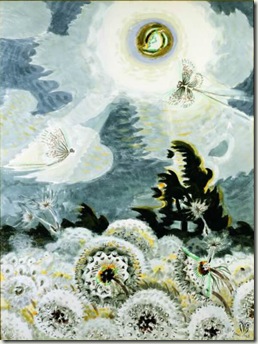 This painting is mentioned in a conversation about Burchfield between Hunter Drohojowksa-Philp and Robert Gober, which you can read online at Artnet here

HDP: And in this room is one of my favorite watercolors of the dandelions, where it looks like he’s lying down in a field of dandelions. RG: Exactly. In the middle of the night, at 70 years old, with his head on the ground, looking at the moon through dandelions. That’s the way to go.

Yes indeed Charles, you and my father, but yours would have been more restful!

The next painting .. a start

Meanwhile back at the bee house here, I am drawing a Lassioglossum and, happily, Jane at the excellent Urban Extention Blog has a super photo which vindicates my choice of a dandelion of some sort to accompany this smart little bee. 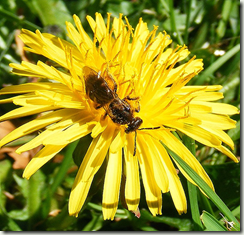 I have painted the bee and will probably perch him on the leaf of a dandelion or at least one of the related family, but am procrastinating about the flower … all those petals..sigh.
Of course I should say flowers because the dandelion is a composite flower, so made up of many separate tiny flowerlets, each with their own petals and nectar source.. a true bee banqueting table. 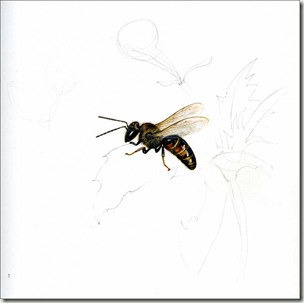