Buzz.. The Bee Exhibition is all set for June, Lumen Centre, London

An Little Oasis of Bee Tranquility.. right in the middle of London!

There are lots of wonderful “Bee” events going on in London this year and of course mine will be one of them ( shameless trumpet blowing and self promotion!)
I am proud to announce “BUZZ …. a Celebration of British Bees and their Flowers” will be held in June from the 1st to the 26th at LUMEN. 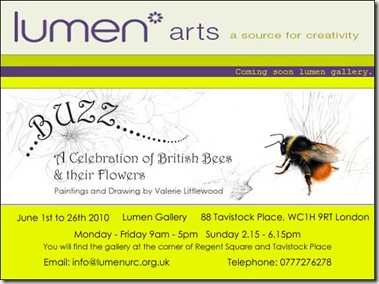 And the venue is just BEAUTIFUL! .. I really couldn’t be more delighted. It‘s the about-to-be-opened gallery of LUMEN the newly opened multi-faith centre in Bloomsbury.

It’s a tucked away, very beautiful space, in my very favourite part of London not far from the British Museum. Leafy squares, book shops, hospitals, Universities, the British Library. Home once to Dickens, Darwin, Vanessa Bell, Virginia Wolfe, and Yeats.  Memories of the old publishing houses, Faber and Faber, and of course Beatrix Potter’s publisher,  Frederick Warne.
I remember seeing their office by chance, years ago. Bloomsbury is wonderful, such history, such learning, such literature. LUMEN CENTRE from an article in e.architect:

..An exquisitely designed new multi-faith centre for worship and contemplation by Theis and Khan Architects

Created within the shell of an existing 1960s United Reformed church, lumen will be used regularly for Christian services as well as offering an open invitation to people of all faiths to use the spaces. The site has a rich history. The 1960s church replaced an older church, which was bombed during the Second World War, and backs on to an ancient burial ground for the people of Bloomsbury, now called St. George’s Gardens.
The new sacred space, known as the Shaft of Light is central to the design. A large-scale intervention, rendered in white, is a spectacular conical, shell-like space, which reaches through the full 11-metre height of the building to a single roof-light. The Shaft of Light offers people from any faith or belief a secluded area for worship or for private gatherings. The quality of the light inside the space subtly changes, depending on the weather and time of year, adding to the sense of peace and separation from the bustle of the outside world.
In addition, a tranquil garden at the rear of the building  offers a contemporary interpretation of a cloister, with slender brushed stainless steel columns supporting an arcade around a central courtyard planted with herbs and silver birch trees. The cloister will be open for people to enjoy a quiet moment of reflection or simply stop for a lunchtime sandwich.
Commissioned by the United Reformed Church, lumen has continued the ancient tradition of commissioning artists and craftspeople. Working with Modus Operandi art consultants, the church has commissioned two artists to create new three dimensional art works, which are carefully integrated within the building.
Internationally acclaimed artist Alison Wilding has created a trio of artworks: a new font, a drinking fountain and a garden fountain,a shallow bronze dish with the inscription “A spring of water, welling up to eternal life” (John 4:14). The strong architectural form of the Shaft of Light, designed by Theis and Khan Architects is the key point of reference for both the drinking fountain and font.

The north window on the street front, features a spiralling, geometric sculptural screen, entitled North Elevation, by rising artist Rona Smith. Made of bronze, the sculpture is suspended within the alcove of the window, and arcs gently into the main space. The design evokes the traditional imagery of many religions, including Christian, Islamic, Hindu and Buddhist. The artwork explores how geometry unites diverse systems of symbolism and representation and reflects lumen’s ethos of inclusive worship for people of all faiths.
The art works which have been commissioned aim to signify universal values, yet each are open to the interpretation of the individual viewer. We hope that they will encourage a sense of contemplation, and a further means of engagement with the centre, bringing together people of diverse beliefs and backgrounds.
Maggie Hindley, (former) minister Minister, lumen comments: “What impressed me about our architects and artists was that they listened, and asked questions, and brainstormed with us and really got to understand our vision before coming up with any proposals; and then they listened some more as the plans evolved. So we got a physical expression of our own goals, but more beautifully and imaginatively than we could have dreamed of.”

Read the whole article here.. although I have not left much out! Also read all about LUMEN, their history and wonderful facilities on their website here. I will be telling you more as the weeks go by.

Browse, Read and Relax The gallery will be sharing a space in part with the newly opened cafe, which we are hoping will be serving honey cake to have with a cup of tea… and maybe other honey themed foods! ..more on that to come… 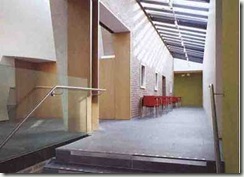 part of lumen cafe and gallery. And while you are having a refreshing snack you can do some reading as well!

I am delighted to say we are getting support so far from:

Buglife.org.uk “the only organisation in Europe devoted to the conservation of all invertebrates,  …passionately committed to saving Britain’s rarest little animals”.

The Herb Society who are having a “BEE AWARE” year and whose conference this year is all about bees.

The Bumblebee Conservation Trust two of whose bees, the Shrill Carder and the Great Yellow I will be painting  for the exhibition.
They will all  be providing  literature on bees, herbs, flowers and gardening  for bees….

And  Brigit from the wonderful “The Big Green Idea” the charity dedicated to showing people how sustainable living can be easy, healthy, inexpensive and fun, will hopefully be having an input too. ….all this and I have only just started asking, so lots more info to come and it will be on the blog and even, maybe, on Twitter..