The White Tailed Bumble Bee and the Short but Merry Life of the Male Bumble Bee.

This is another of the Natural History Museum’s “Big Six” common UK Bumble Bees and very similar to B hortorum.  (I think some of these bees are very hard to distinguish from each other).
Bombus lucorum has an all white tail (mostly)and the yellow stripes are a clearer more lemony yellow, than those of B terrestris.

The males may have varying amounts of yellow on their thorax too! Its all quite difficult for a beginner. I have chosen to paint the male. He has the most charming moustache and it gives me the opportunity to write a little about the male of the species.

Males are much smaller than females and have no pollen baskets on the hind legs, which is fine as they don’t really have much fetching and carrying to do! 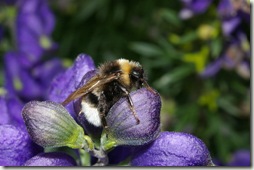 The Life of the Male Bumble Bee

“Short” really sums it up, but by turns frantic, in his search for a lovely mate, and lazy, in that he does no work to help with the colony. But then it’s hard to blame him as he really has little chance to contribute much.
One of the last bees to emerge from the nest, the males are not even a twinkle in the Queen’s eye until after she and her workers have established the colony. As Bumblebee.org explains, the arrival of the males signifies the decline of the colony.

“The production of males usually signals the beginning of the end of the co-operation and organisation of the nest. The males drink the stores of honey, but do not forage to replace it. “

Once he has left the nest he is not, generally, allowed to return so must resign himself to a hedonistic life of chasing queen bees, drinking nectar and sleeping in flowers.  His sole purpose is to mate. (Although its seems that some more enlightened American bumble bee males,  a breed of “new bee” I guess, do lend a hand in incubating the young.)

After the males have left the new young virgin queens will begin to emerge and the game is on. Courtship rituals depend on the species but all the males will spend a considerable time on the look-out for a mate.
Sometimes they will perch on some high vantage point and adopt a “knock ‘um dead” approach, zooming in and literally knocking the female to the ground, some lay sweetly smelling pheromone trails to attract a mate and some, abandoning all semblance of romance just hang around the nest entrance and pounce.. something like a night club I suppose.

Some people, noticing a sudden increase in bumble bee activity in the summer, become nervous and think the bees may have suddenly become more aggressive, but stinging you is the very last thing on the male bees mind!
It’s interesting that different species of bees will patrol for mates at specific heights. Bombus lapidarius, terrestris and this little lucorum male will conduct tree top high romance while sylvestris and hortorum hang out nearer the ground.

This patrolling behaviour was noticed by Darwin .. here is a passage from “Bees of the World” by Christopher O’Toole and Anthony Raw:

“He observed that several male bumble bees flew along well-defined routes in his son’s garden. He enlisted the help of his grand children in following them and it transpired that the bees flew along circuitous routes. Darwin’s notebooks show that he speculated correctly as to the nature of these circuit flights. He notes how several males of Bombus hortorum patrolled the same circuit and landed repeatedly  at the same spots, which he suspected were scented by the bees. He wondered of the bees at their landing places “Is it like dogs at a corner stone?”” ….

Nice to be Darwin’s grandchildren..if a bit dizzying..

I decided to have a front  view of this little bee to show off moustache, perching on some leaves.  I was researching about how important willow trees were to bees, especially as they are an early nectar source for spring bees, and happened upon James’ blog Musings of a Surrey Beekeeper.

He was feeling guilty about cutting back his willow.  Being a new bee keeper as I am a new bee artist, he was not aware of how important willows are either. But they didn’t make it easy for him:

”Willow has this uncanny knack of reminding you that it is a very efficient whip.You turn your face towards it and out of nowhere this little slither of willow just whacks you across the face and it stings – especially in the cold weather. It is almost like it is getting you back for something!” Read more..here

It was the bees James.. the bees…. Anyway I included some willow leaves for James, and to appease his bees! 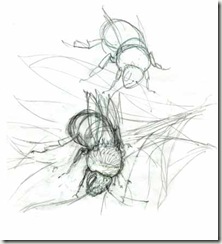 The Delightful Little Bombus lucorum male.. on the lookout for a girlfriend.~ 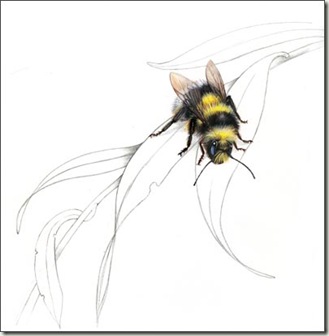