I have started my next series, “20 British Bees” with this little bee,The Red Mason bee, Osmia rufa.

I painted a couple of heads a few days ago here. This is the one whose female of the species, along with O corniforns and O cornuta, has little horns on her face which she uses to mould the mud when making her nest cells.

These bees are really delightful and not as destructive as people think. They rarely make new holes in your walls but rather use existing holes. This is an orangey-red haired bee, and very similar to O cornuta but as far as I can make out, rufa’s last two abdominal segments are darker and rufa is the most common Osmia species in Britain.

“One female Osmia rufa does the pollination work of between 120 and 160 honeybees. Another advantage is that even in orchards which already have honeybee hives, when these are augmented with mason bees, there is a demonstrable improvement in yield, fruit quality and shape. The same is true when Osmia is the sole or major pollinator. And importantly, mason bees are not susceptible to the Varroa mite. The Red Mason Bee is docile and safe with children and pets. No specialist training is required in their use and they are never a nuisance to neighbours. They are also fun to watch and, by providing them with nest sites, their conservation is encouraged.”quoted from Cropfosters from Chris O’Toole, Bee Systematics and Biology Unit, Oxford University Museum of Natural History.

Just as there are commercially available nests for osmia bees in the USA there are also many companies in the UK who can supply nests, and I think cocoons. These bees will not be active for very long, just from April to June.

These photos below are from “Bees of the World” by Christopher O’Toole and Anthony Raw, where there is an excellent section on the Red Mason bee. The top photo shows some artificial homes, with mud seals put in place by the female when the nest is complete. In these bottom photographs rufa is collecting mud and carrying it home in her powerful jaws.

“She uses mud to partition and seal the cells Several nesting females may find the same area of mud and their activities can create a distinctive hollow or “quarry”. She uses the horns to tamp mud into position when closing a cell.”

So look out for quarrying bees come April! Like other members of the Megachile family she carries pollen, not on her legs, but in the scopa of stiff hairs under her abdomen, see also Anna’s Megachile “Leafcutter Bee” here.

Interestingly,the above author, Christopher O’Toole, retired from Oxford University and set up the Oxford Bee Company whose products include bee homes and books about the Red Mason bee.
These products are readily available in the UK, and, if designed and approved by him, should be good!

IF all goes according to plan, the “20 Bee Paintings” and some accompanying flower paintings will be on exhibition in June. Things are still not decided yet but it means I have to get a move on. I am still deciding on format and size for the series, so this is a trial piece. Some sketches and trials.. 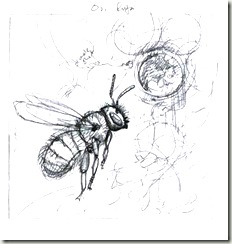 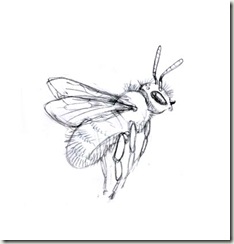 Colour study, plus I have given her a nice nest hole in a wall with a handsome moustachioed mate. 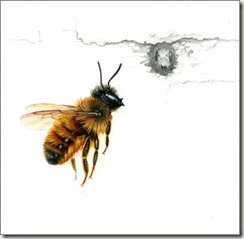 And then I added some ivy as well, which I have just sketched in for now. I will paint a final version, once I have really decided on the layout size etc 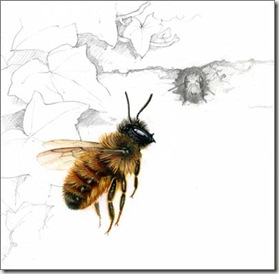 This bee project will be three months of work.. I do hope you won’t be too bored! …but I do promise some flowers and other things as well!