Celebrating The Slowness of Art

Over 2 years ago I wrote to Robert Genn, whose excellent artist’s newsletter I have been receiving for many years. I wanted to raise a tentative hand for slowness in art. I may have been out of step with current thinking because he did not reply.

It was in response to the rise of the “daily painting” blog phenomena. The best daily painters are really wonderful and you can see exploration and enquiry in their work, but not all people work that way and I felt that some were being rushed into painting and drawing anything just to hit that daily deadline.
Some 5 years ago artist Grayson Perry wrote a piece which I had some sympathy with pleading for artists, galleries etc. to slow down a bit. You can read the whole article from Times online here.

“We are .. prone to being sucked into the idea that fast is somehow central to modernity. To be relevant is to be broadband-quick and dressed for next season………Picasso set an awesome precedent by knocking out three art works for every day of his life but Vermeer is held in reverence for a surviving oeuvre that wouldn’t crowd out the wall space in a squash court. So I ask gallerists and curators not to expect artists to churn out cool stuff like some cultural ice machine. Often I plan to see a certain exhibition only to find it has been superseded in the blink of an art historian’s eye by the next show. If we all spent longer thinking, making and looking perhaps less bad art would get made, shown and seen.”

I am a great admirer of the “craft” of art, of the 10000 hours you need to put in to get something right. Not only do I admire its practitioners but it seems to be something I have to do.
I enjoy ceramics, but the slow hand building of forms, not work on the wheel. I like the cutting and preparing of lino blocks for printing, I will grind my pigments when I work in egg tempera after the laborious but satisfying preparation of gesso grounds. I have gilded and meticulously illuminated tiny things. I enjoy hand beading one tiny bead at a time.

All this is slow work and does not make for a very exciting daily blog post. I know I am not alone and that many artists love this time spent engaging with materials and subject. There is a meditative and contemplative aspect to it.. that is much of its addictive charm.

My good friend John is taking some first steps towards fulfilling an ambition to be able to record his love of the natural world in drawings. Already an excellent photographer on his blog Nuncketest, John is charting his drawing progress publicly. If you go there you won’t see any flashy, slick, formula painting which often seems to clutter up galleries and great swathes of the internet but the intimate, quiet and thoughtful journey of someone who is really looking hard at things. 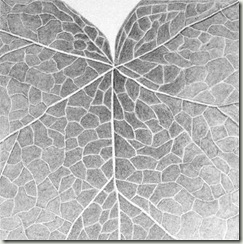 This “simple” leaf drawing was the result of ( a conservative, I think) 25 hours of work and observation. I am so glad John has recorded the time taken and I love that he talks about picking up “some comfort with my pencils and their sharpening” . You can read more about John’s progress and his observations of the slow world of drawing.

He records his thoughts and tutor feedback too. He is also telling you things that I want to put in every blogpost, that dog my steps every morning as I approach the drawing board.

“You know, sometimes getting started can be the most difficult thing. Whether it’s coming up with the subject that feels right or a matter of confidence or even simply overcoming inertia, getting to the initial layout can be a chore. Once I get over that hurdle, I can settle nicely into a kind of meditative involvement. It’s just that darned getting started…”..

The Slowness and Skill of the Animator.

To be able to convince us that something that started out as pencil lines has not only a life, but a personality we can relate to must be almost the pinnacle of creativity. Despite digital wizardry, it still is a slow art, and like many slow arts destined to be viewed in a second by a fast moving, image hungry public but the time and thought behind the work is staggering. I look at lots of animators blogs.. one belongs to the brilliant animator Shane Prigmore who has just won an “Annie Award for best character design in an animated feature film” for the delightful “Coraline”.

“Henry Selick, knowing I was also an animator, asked me if I might Design , Develop and Test all of the Facial Animation (Expressions, Mouth shapes, Dialogue,Teeth) for every character in the film. How they will emote, and talk and hold their mouths and move their brows from every angle. I WAS ECSTATIC!! I did thousands of drawings designing the MASSIVE library of mouth shapes and expressions, and a SLEW of traditional animation dialogue tests to make sure everything worked just right. Here is a VERY , VERY , TINY sample of just some of my facial animation design work.” 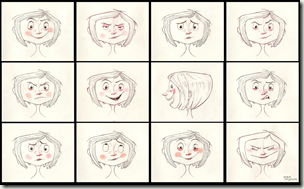 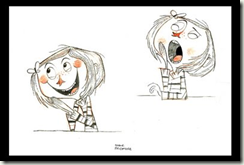 You can read more about the fascinating process of getting this animated film into production on his blog, but you also see his beautiful drawings. this from a visit to the zoo, blog post “Back to the Zoo” in 2006. He says in his college days he was drawing “at the LA zoo almost every week for four years.” 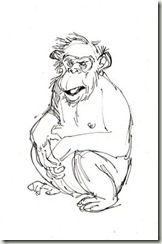 The other day I heard a lady saying how very talented her daughter was at drawing.. said daughter wants to be an animator “ She can copy all the Manga characters really well ” said proud mother.. yes but can she draw.. I wanted to ask?

Illumination, a manuscript 10 years in the making

Another art form I have always admired is that of the illuminated  manuscript.
My own very particular favourite The Luttrell Psalter a fabulous work of mystery, charm and humour made between approximately 1330 and 1340 and produced for the wealthy Sir Geoffrey Luttrell who lived just a few miles from my home.

I have pored over and admired its contents since I was a little girl, its scenes of rustic Lincolnshire life imprinted on my mind from the pages of school history books (and yes there are bees!).
In his excellent scholarly book on the Psalter “Mirror in Parchment”  Michael Camille describes the multi talented unknown artists, thus:

“Part alchemist, part cook and part botanist….Like the farmer, the illuminator had to keep an eye out for the weather which could affect his field of paint as easily as actual crops”

This is of a time when the artist was one of the “anonymous selfless medieval craftsmen, before the age of “art”.. and before the elevation of “artists” into some sort of special beings by the Royal Academy.
You can turn the pages of this wonderful book and others and consider their slow and careful production at the British Museum’s online “Sacred Texts” site http://www.bl.uk/onlinegallery/sacredtexts/ttpbooks.html 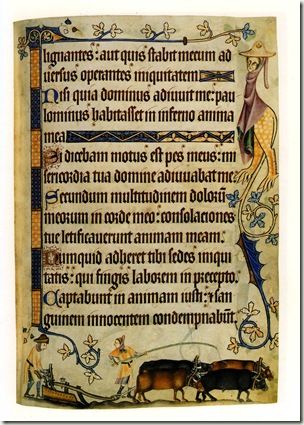 What must be one of the most famous of medieval ploughing scenes with its doleful plodding oxen and dour ploughmen.. complete with strange being in the margin. from “Mirror in Parchment”  by  Michael Camille 1998. See also his excellent “Image on the Edge” 1993’

However, time spent does not equal good art. I am the first to know, to my cost, that  sometimes just five extra minutes can render something overworked and lifeless, and I love to see the hand of the artist in things, cold perfection is not what I like at all.

The beauty of a simple line drawing or of a confident brushstroke can be breathtaking but the casual observer may not know or care that perhaps 50 years or at least 10000 hrs of practice, experiment and careful observation may be its bedrock.

Why have I written all this????? ….well just to remind myself of the things I love,  and that being slow and spending 5 hours trying to get a bee’s face right is OK !