I had to include clover in one of the bumble bee paintings because the bees  are such crucial  pollinators for this important crop.
Bombus terrestris, the Buff Tailed Bumble Bee must be one of the most common bumble bees we see in the UK, recognisable (as you might expect), by the Buff coloured section of the tail and its two yellow stripes which are a deeper yellow that those of the B hortorum.

I still have the small disintegrating sample which I brought back from the UK last year, which has been useful.

I sketched and wrote about it before, in regard to “nectar stealing” here.   I won’t repeat myself but will shamelessly re-quote this delightful extract about bumble bee behaviour from the wonderful Bumblebee.org, which seems quite apt, given the date and may well strike a chord with some.

“I get a huge number of emails from people asking me why their bees are sick, when in fact they are just males who have spent the day chasing queens and drinking nectar and then stayed out all night. Sometimes it rains and they get soaking wet, but they will recover once they drink or get warmed up by the sun. Sleeping inside a disk or bowl shaped flower is a good strategy for these bumblebees as research has shown that the temperature at the base of the bowl, near the source of nectar, can be as much as 10 °C higher than the surrounding air temperature.

Happy Valentine’s day all! I hope the sun shines on you. It’s damn cold here I can tell you and not the weather for either man or beast to be sleeping off a hangover in a flower..

Good news for Bumble Bees in the UK .

The Bumblebee Conservation Trust has just been voted the most worthy eco-project 2010, from the ‘Live For the Outdoors’ website  and its  Pembrokeshire path project, will now be funded with EUR30,000.
Pippa Raynor, the Conservation Officer who will be working on the project explains what they will be doing:

“We will be creating a wildflower-rich habitat to support rare bumblebees along a new 10km path in the Pembrokeshire National Park. By connecting key sites, this attractive route through spectacular scenery will help prevent the national extinction of the shrill carder bee.

The project will benefit lots of other wildlife too; Wales, like the rest of the UK, has lost most of its wildflower grasslands, so creating and restoring these habitats will benefit the plants, butterflies, bees, birds and other beasties that depend on them.
It will also create a lovely place to walk, with flowers and bumblebees along the path that takes walkers, horseriders and cyclists through areas that were previously inaccessible, thanks to the new route provided by the MOD.”

Sounds wonderful…Lucky  Pembrokeshire! I am looking forward to the possibility of seeing and painting a Shrill Carder bee, they are really pretty! Meanwhile back to Bombus terrestris, 2 early sketches: In the second one I bent the clover head over a little more than the first. 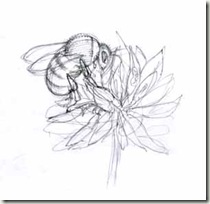 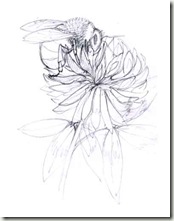 And in the end I tilted it over a bit more still… these are fairly substantial bees after all. I may add the leaves later when I look at the set as a whole. No more time left today! 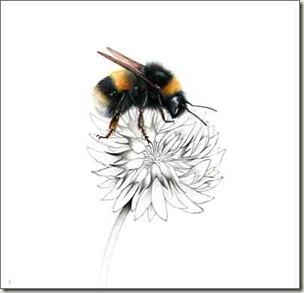