Over the past couple of weeks I have had to meet new people, in that social party way that I am not used to. “What do you do?” they ask. “Well” I say, “I am an artist and designer”. “Oooohh” they say  “what are you painting?”

I can see their mental bubble.. a nice landscape, a bunch of flowers, a wide eyed child, a favourite pet or even an interesting but accessible abstract. “Bees” I say.
I then have to repeat it… “ Bees,  you know,  buzz buzz…!” It is a bit of a conversation stopper, but they did ask. “Oh” they say and smile.
Most  wander off to find someone easier to talk to.
Some persevere.. “Why?”  I do have a good answer, I can cite my kind commissioner Deborah and her 16 bees, but, even before then I had a good answer. It’s because they are important and because my parents used to keep bees.

When I go home to the UK, gardening is my job of choice. It’s too much now for my 92 year old father and while the centre of the garden is just about under control, the peripheral ivy clad walls and weedy borders are gradually creeping inwards.

I have pictured them making slow but relentless progress, eventually insinuating themselves into the house where my poor hapless father will be found some days later, immobilized by leafy intruders.
So back in May last year I had work to do. “Can you just tidy up around the Garage?”.. “Of course”..I say.  The area is a lost wilderness, overgrown with tangles of ivy, where knots of virulent nettles with their horrid trip wire roots and savage stings quietly anticipate your unprotected flesh.

There is a rampant Virginia Creeper which, if not checked, will rip stones from the centre of the beautiful old stone wall, aided by gripping ivy roots that sucker their way along everything, for yards and yards and yards.

There are tearing brambles and the most deadly Pyracantha in the world, planted long ago to deter intruders but now gone rogue. But clearing out is a satisfying job and there is always some anticipation of discovery, isn’t there?

Like Sleeping Beauty’s good prince, I cut down, chopped back and grubbed out.  I found nothing more exciting than some nice old pots, a million angry spiders and the friendly garden rat, until, tucked away between the garage and the wall, listing slightly and quietly rotting back into the earth, I came across the old beehives.

The rush of memory was almost unbearable. I had almost forgotten about the bees,  my mothers much loved bees.  The rows of honey jars, the paraphernalia of the bee keeper, supers, smokers, spinners, wax, combs, frames, veils, hats, gloves.
The smell of honey, the stickiness of honey, the joy of runny honey in the summer and hard crystallised honey in the winter that you lay in slices on hot buttered toast and the complete and utter joy of sticking your finger in a warm honeycomb.

The mysterious gatherings of the beekeepers, ancient tweed clad countrymen and women who came to the house for tea and cakes. Who were called over to deal with the terrifying swarms, who brought clinking trays of new jars or old bee books or just bee wisdom.
My mother going out to talk to the bees, to tell them all the family news, sharing some of her life with her little golden workers, and me, timid and afraid of being stung but fascinated by humming busy boxes at the bottom of the garden.

That was many years ago, but seeing the old hives and of course reading so much about the problems of declining bee populations made me think more about bees and our relationship with them.
There is something about bees in general that enchants us. Learning about the many different species of solitary bees has in particular been a revelation to me. I have been reading Karl van Frisch’s “Animal Architecture”. Here he makes an interesting point.

“The great majority ( of bees)  live alone – they are “solitary” bees, and many are not recognizable as bees at all except by experts. They vary greatly in size and appearance.
Some are tiny insects, no more than 2 millimeters long while others measuring nearly four centimeters appear giants in comparison. Some are nearly hairless others furry.
Many delight the observer by their varied patterns and attractive coloration.

Bees differ from predacious wasps in one important particular: they are strictly vegetarian, feeding themselves and their brood on pollen and nectar. This habit endears them to kindhearted people, for they do not destroy in order to live…”

A couple of sketches I did back in May of the old beehives.
They are not terribly interesting, nothing really but a pile of supers and a base. In front, leaning against the wall is an old piece of the chicken coop. The chickens and the geese were a whole other story. 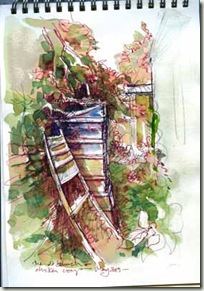 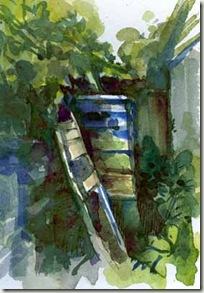