Entertaining the Euglossas, some notes from the Bee Boarding House

Just over a week ago a small, light as a feather, Fed Ex, overnight express box arrived at my door.
If it had contained the crown jewels I couldn’t have been more excited.
Sometimes the best presents are the ones you are expecting.
The little box was from a very Kind Researcher in Southern Florida with whom I had been corresponding about the beautiful and exotic Euglossa Orchid Bees.

In the box, under layers of bubble wrap, snug and safely packed in little labeled glass bottles, complete with air and overnight honey water snack, were two beautiful Euglossa bees.

“He” and “She” came with an additional supply of honey water, a dropper and full owners manual. 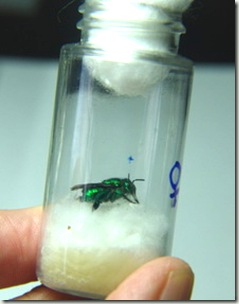 Firstly these bees are just GORGEOUS.

They are big and they are an exquisite shimmering blue green with dark, dark wings. They are full of character and I was completely entranced by them. My simple plan was to simply take some photos and simply open the box and let them go. Everybody happy … well, except that is for the Invasive Species agency.

Unfortunately for the bees and for me, and although they live happily dancing around the fire bushes in Fort Lauderdale they were not allowed to fly free here.
In fact these bee are not supposed to be in Florida at all.
But having crept in from Central America, maybe as unwitting on board stowaways or in nests in exported timbers they have now established  a handsome presence in the south.

The repercussions of their arrival are as yet unknown.
Now I do understand these concerns and have no desire to be the main culprit in an orchid bee takeover of Orlando’s leafy suburbs. Visions of these sturdy little, armour clad, bees, elbowing out the natives, however aesthetically pleasing, are not good.
But there were only two alternatives.

The first unthinkable and unspeakable one involved the freezer, the other was to send them back, which seemed by far the best idea.  However my Kind Researcher was away for a few days and so the Euglossas had to stay. 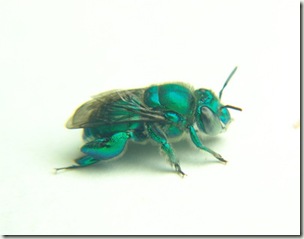 So how does a bee novice entertain 2 Euglossa bees? I must say here and now that I hate things in cages.
Birds and bees are things of air and sun and space and meant to fly. But these bees had to be contained.

On day one, we had the photo shoot and they were confined to some large glass tumblers, but that’s not much room for a lively bee, so I made them some more spacious homes in big plastic containers in an effort to keep them temporarily happy. But how do you know if bees are happy?
Like any good hostess  I read and re read everything I could about them, what they liked to eat, what they liked to do.  I noted, inwardly digested and committed to memory the list of flowers they liked. I did my 6 mile round trip to the Gardens to steal the exact exotic blooms from the butterfly garden.

Long tubular flowers whose deeply hidden nectar reserves would exercise their extremely long tongues. I did this just for them. I bookmarked the page that described the collection of mud and resin  by the female for her burrow, and brought earth, water and hollow twigs in case nest building instincts were pressing.
I underlined the passages in my Kind Researcher’s article about the astonishing scent gathering of the males from orchids and so I procured eucalyptus leaves, allspice leaves and a clove for him to play with, just to reassure him that I could find substitutes.
I set up twigs and leaves and hiding places and of course an endless supply of honey water in little pots made from tinfoil. In short,  I laid at their little bee feet the bee equivalent of gold, frankincense and myrrh. 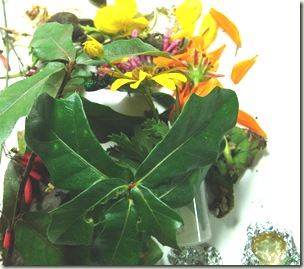 “He”,  just visible by the yellow daisy, clinging to a live oak leaf, sleeping off another honey water binge.

The responsibility weighed heavily on me. I fretted.
Was sleepless and concerned.

We had cold inclement weather which meant moving them around the apartment from one sunny spot to another. They loved the warmth and the sun, it seemed to cheer them up, just as it does us humans.

Honestly, if these creatures had been the very last golden bees from the very last golden beehive from the very summit of Mount Athos, they couldn’t have had more loving care and attention lavished upon them.
My rewards?
Well to the casual observer not obviously substantial.
They didn’t  perform tricks or learn their names. The male who I christened Chris, spent most of his day loafing around, either adjacent to, or in, the honey water pot, drinking copious amounts and then “resting”. 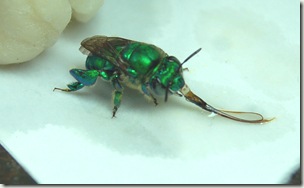 His amazing long tongue mopping up a honey water spill.

“He” was however particularly endearing and stomped purposefully around his enclosure with his Cossack trousered hind legs. At night “He” found a leaf or petal to hang onto and ”slept” with his jaws firmly clenched and antennae at half mast.
But “She”, carelessly rejecting my sweet smelling flowers, my mud and hollow twigs, spent much time perched on the top most leaf of her palace garden, glaring at me malevolently or exerting huge amounts of time and energy trying to burrow out, biting fruitlessly at the plastic container and shredding bits of paper, which nearly broke my heart.
Every bone in my body ached to lift the covers, open the windows and say “ Go …Fly..” 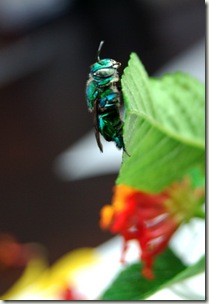 It was a long four days. The day came for their planned return.. they were alive and well and easily coaxed into their little well provisioned travelling compartments.
I took my buzzing box to the post office where to my silent dismay the Fed Ex lady turned the parcel upside down and slapped the shipping label on the bottom with a resounding thwack. “

They are bees”  Chris said on the way home  “ They are fine upside down”.
I slunk home and emailed the Kind Researcher, imploring him to lie to me if they arrived stiff and still in the morning.
According to his anxiously awaited email they arrived alive and kicking..

“I took them to a firebush and released them. The male flew off immediately while the female hovered in front of me for a few seconds before flying off.” …

Kind Researcher, you wouldn’t lie to me… would you??    Facts and a film about these enchanting little orchid bees tomorrow. 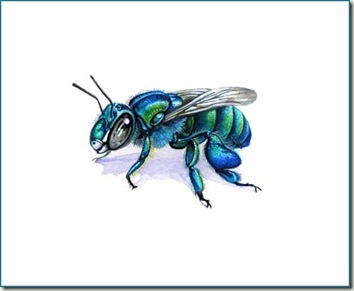