The Beautiful but Grumpy, Bombus lapidarius

Number three of the four Bumble bees is Bombus lapidarius, the (other) Red Tailed Bumble Bee, or the Stone Bumble Bee after its name “lapidarius”. Called this because of its liking for making nests under stones or in stone walls.
The one I have sketched is the female, all black with the beautiful flame red tail. Below is the male with similar colouring, but with a yellow band on the thorax and a tuft of yellow hair on the face. 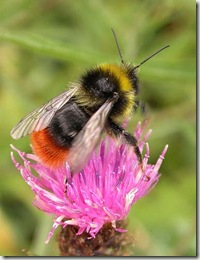 These beautiful bees are common in Europe, I saw two while I was at home in Lincolnshire in September. They make a slightly later appearance than some other Bumble Bees. and form colonies of up to 200. They are busy active creatures, visiting many different species of flowers but seem to particularly like clover and dead nettle and they apparently like an easy landing, so will also choose daisies, dandelions and thistles.

Bombus Lapidarius has a short fuse. They are known to “buzz” you menacingly if you disturb or threaten them. Bad behaviour, in the old days, was punished with deportation but it was in spite of this grumpy nature, that worthy Victorian, Thomas Belt, advocated these bees be shipped out to New Zealand to help with pollinating clover.
Thomas Belt was an extraordinary man.
This is the Thomas Belt who “discovered” the complicated relationship between the Bulls Horn Acacia and ants. (see my earlier blog entries for info about him and the twiggy home of my beloved, now long gone “Ant” here)

The following from 1897 edition of the wonderfully named “Science Gossip” demonstrates how his early childhood toughened him up for his astonishing life as mining engineer and naturalist..

I know nothing more interesting to a naturalist when he wishes to rest from more serious study than to devote a few hours on a summer’s day to watching the humble bees at work amongst the flowers.
They have been favourites of mine from early childhood, one of my first experiments being the determination of the stinging powers of the three species, and the time they might be kept between the hollow of the two hands before they got sufficiently angry to sting.

My recollection is that Bombus lapidarius, although it has the longest proboscis, has also the shortest temper and most virulent venom, and if it be not set free as soon as its first angry note is heard, it will not fail to punish severely.
Notwithstanding this trait in its character, I have no hesitation in recommending that it is the one that should be sent out to New Zealand, and that Bombus terrestris should not be.—Thomas Belt, the Cedars, Ealing.

I will explain why he does not recommend B terrestris in the next post…
But, forgive them their occasional fit of pique, grow some of their favourite plants… or rather go easy on the weeding in your garden, as weeds seem to be their flower of choice.

What could be nicer than to have these strikingly beautiful bees gracing your flower beds and what a good excuse for that neglected patch… just don’t upset them!
I have spent hours pondering this handsome bee. Its beauty is in its dense blackness, contrasted with its flame red tail. The body tends to be naturally very curved which means that seen from above its head is almost always invisible, but it does have the appealing chubby bumble bee look. 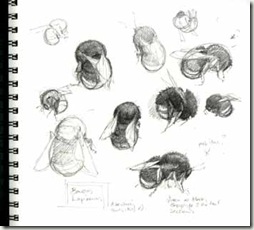 However in the end I decided on more of a side view which shows off the beautiful tail and some head features, while retaining the really furry nature of the pile…. It’s always such a compromise.. 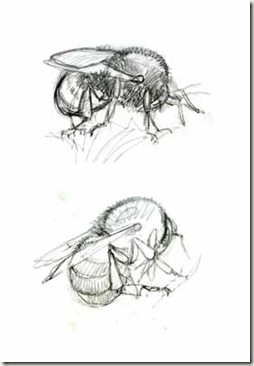