Just an addition to the last post concerning a few of the crow family. I had not realised that rooks do not circle the fields or gather in noisy rookeries around ancient tree shrouded houses here in America, but then you do have the wonderful grackles.

The crow family have a bad reputation all round, ominous heralds of bad things, spirits of the dead, witches companions etc etc. Just look at the old collective nouns, “A murder of crows” and “An unkindness of ravens”, the “thieving” jackdaws and “unlucky“ magpies. But, they are wonderful birds.

It’s easy to know a rook from a crow or a raven because rooks have bald beaks, crows, a similar size, have dark beaks with a few feathers at the base, and ravens are big, with very feathery beaks. Jackdaws, delightful little birds, have a grey hood. In appearance rooks often seem rather tatty with ruffled feathers. 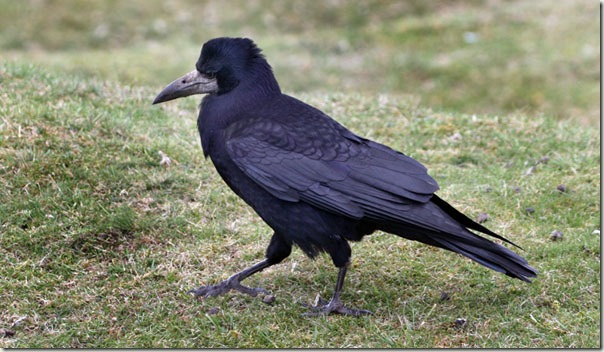 Only last night on BBC America (which, incidentally, delivers and endlessly repeats 90% of the very worst of what the BBC has to offer, great showcase BBC!!! Why??) Gordon Ramsey was out in the woods, cooking rook pie which he declared to be better than pigeon.

Rooks make Hooks
Rooks are very intelligent birds as are all of the crow family. There is delightful bit of recent film of a rook making a hook, to pull a little basket containing a grub out of a glass tube. Clever clever.. see it at gawkk.com here. 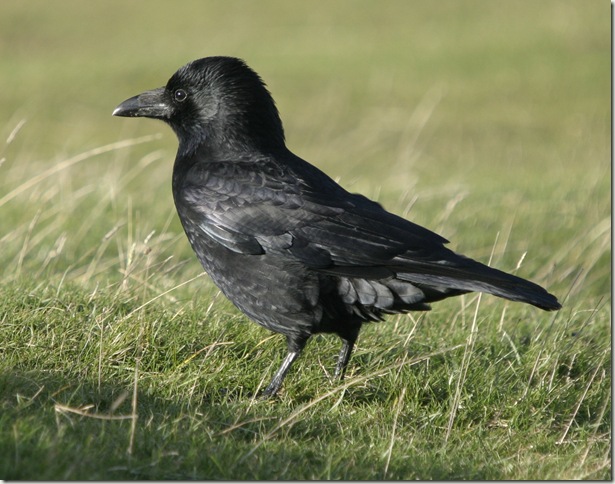 Crows have dark beaks with a few feathers and are a similar size to the Rooks, but you can see how different they are in form to the Raven below. They are wonderful subjects for “the dark”. I have always especially liked Leonard Baskin’s illustrations for Ted Hughes’ poetry. This crow definitely veers towards the raven. 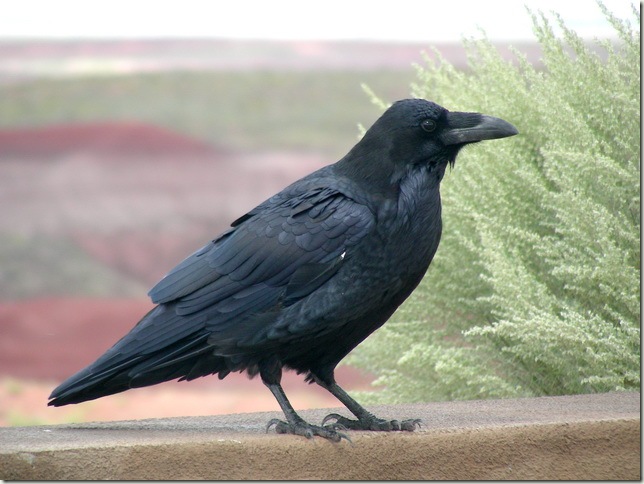 I photographed this raven in the Painted Desert back in September.

You can see the feathery beak quite well. There is definitely something strange about these magnificent birds, something slightly unnerving. They silently materialise, solo, and watch you and they are very big.

It wasn’t there when we arrived and we were the only people at this particular pull in so, we, alone, were the focus of this bird’s attention. We drove on another few miles and stopped again in the Petrified Forest and there it was again.
Of course I am sure the ravens are fed by the tourists but their presence in this desolate but beautiful landscape seemed very appropriate.

The Uk’s most famous ravens “protect” the Tower of London.
From Wiki …
”It had been thought that there have been at least six ravens in residence at the tower for centuries. It was said that Charles II ordered their removal following complaints from John Flamsteed, the Royal Astronomer. However, they were not removed because Charles was then told of the legend that if the ravens ever leave the Tower of London, the White Tower, the monarchy and the entire kingdom would fall. Charles, following the time of the English Civil War, superstition or not, was not prepared to take the chance, and instead had the observatory moved to Greenwich. The oldest raven ever to serve at the Tower of London was called Jim Crow, who died at the age of 44” 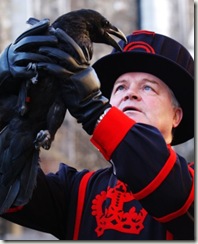 The Tower’s Yeoman raven master, Derrick Coyle with one of the ravens
Image: © Natasha Marie Brown/HRP/newsteam.co.uk, from About.com here

They also have names, namely; Hardey, Thor, Odin, Gwyllum, Cedric, Hugine and Munin…on a macabre note, as well as their daily ration of raw meat, they have bird biscuits soaked in blood.

You can buy Thor… I have rather fallen in love with him, suitable for children over 3 🙂 , see the Tower of London website here.

Judging by his beak he has just enjoyed a couple of the above biscuits.. 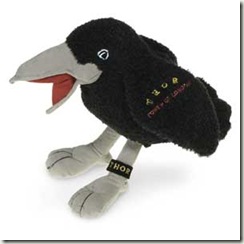 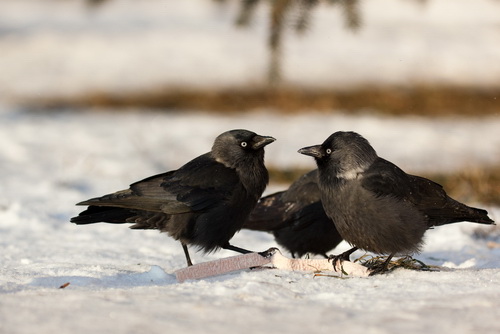 Some snowy jackdaws by Vishnevskiy Vasily at Shutterstock.com

A real favourite little bird who is bandbox smart and has a comical way of bouncing across the ground.
I haven’t seen so many on my recent visits home. The jackdaw was immortalised in the classic Victorian narrative poem The Jackdaw of Rheims from the Ingoldsby Legends written in 1839 by Thomas Ingoldsby , a pen-name of Richard Harris Barham.
It tells the story of a cheeky jackdaw who steals the Cardinal’s ring:

“In and out
Through the motley rout,
That little Jackdaw kept hopping about;
Here and there
Like a dog in a fair,
Over comfits and cates,
And dishes and plates,
Cowl and cope, and rochet and pall,
Mitre and crosier! he hopp’d upon all!The thief is cursed and a hunt for the ring ensues. When the Sacristan sees the jackdaw, at less than his best. the culprit is found. His feathers all seem’d to be turn’d the wrong way;–
His pinions droop’d — he could hardly stand,–
His head was as bald as the palm of your hand;The ring is retrieved and all is well.
It’s a fun poem especially for kids and the cursing sequence is particularly good…..”

See full text here http://rpo.library.utoronto.ca/poem/124.htmlIt seems a curious subject for a set of china but Royal Doulton produced a series of pieces telling the story. 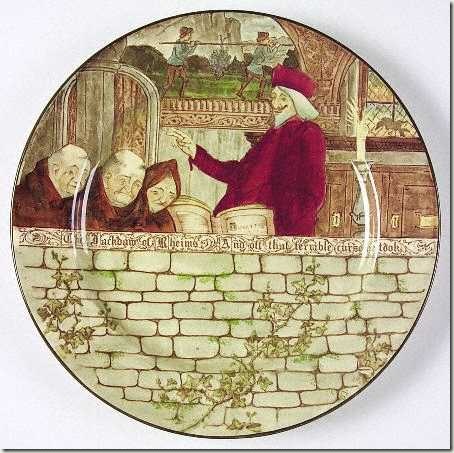 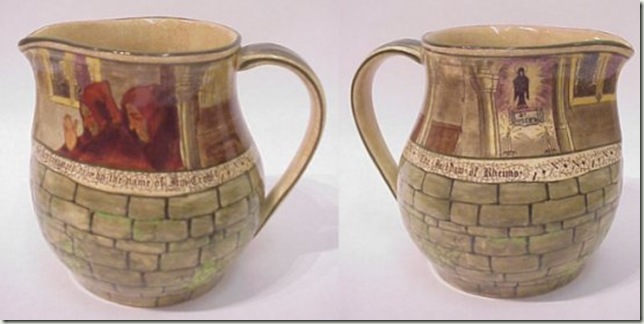 On the back of the jug you can just see the jackdaw, having forsworn his thieving ways..being canonised, a moral lesson to us all.. 🙂