Leaf of the Day: Crepe or Crape, Myrtles and Murder

Probably the most interesting thing I have found out about the crape/crepe myrtle is the seemingly never ending controversy about its name. I had thought it was “crepe”rather than “crape”, because the name refers to the crinkled edges of the petals…in my mind like “crepe” paper, however …..see this and more of the discussion here at Garden Web here

” ‘Crape’ myrtle is the overwhelming choice both in botanical sources and in other dictionary sources,” said Michael Agnes, executive editor of Webster’s New World Dictionary.
The word expert explains that crape myrtle is a compound, two elements referring to one thing. “When that happens, a variant spelling is almost always associated with the compound,” Agnes said. But which vowel came first?
The first reference to crape, without the myrtle, came in 1685. Crepe first showed up in 1797, Agnes said.
“By the time someone decided to call this plant crape myrtle, crape was by far preferred,” he said. The first reference to crape myrtle showed up in the Oxford English Dictionary in 1850.

The trees are everywhere here, in every Mall, on every street corner and scattered around our apartments. While pretty enough in flower I thought the shape of the bare winter stems was more attractive, especially with their little seed pods which are still hanging on. The pale or mottled bark is also a welcome reminder of the seasons in amongst the lush but sometimes relentless green of Florida. I had intended writing about them before, as in November I had found some much bigger pods at Leu Gardens. Sadly they had mostly disintegrated but they belonged to the Lagerstroemia calyculata, which, according to the label is a relatively rare crape from Thailand. 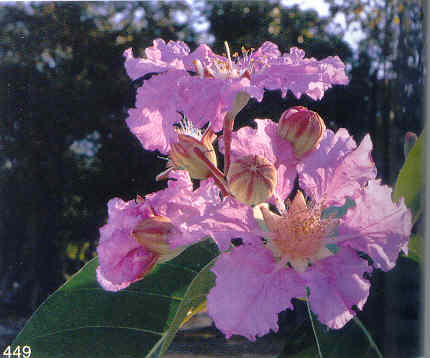 The big and beautiful flowers of the Lagerstroemia calyculata, photo Nirmal Roberts from TrekNature here

But the controversy about the name of the crepes/crapes is as nothing when it comes to the pruning problems and “The Crape Myrtle Murder”, sounding more like an Agatha Christie mystery with Hercule Poirot at last running amok with secateurs, than a horticultural issue.

“Stop the Crape Murder”
Hideous crimes are being committed all ever Texas, some in our own front yards and many right in front of our local businesses. Unfortunately, many have turned a blind eye to the ongoing massacre. Not me! I can take it no more.”…
Such is the impassioned cry from Greg Grant’s article, more here

The terrible crime of “crape murder” occurs when the plant is ruthlessly chopped without regard to the natural branching habit It results in weakly attached new branches which cannot take the weight of flowers and reduces flower bud formation. Better it seems to underprune than overprune and never take its top off!
This is an example of an “underpruned” crape/crepe myrtle which does allows the tree to arch very gracefully. 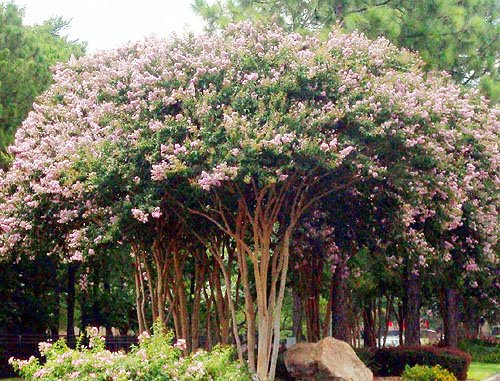 Go here to Wilson Brothers Nursery for this rather attractive printable diagram with instructions on the correct way to prune .. or is it?..it looks a bit severe to me! 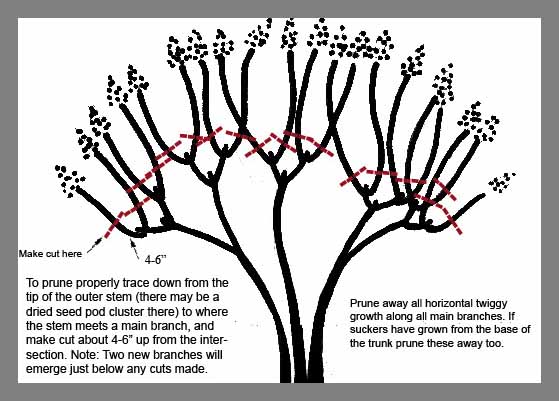 This is the nearest crepe/crape myrtle to us. I took this photo today. It is a couple of yards away from the steps to the apartment and has been tidied up by the garden gang who come round periodically but, even after looking at the diagrams and reading the advice, I am still not sure if murder has been committed or not. 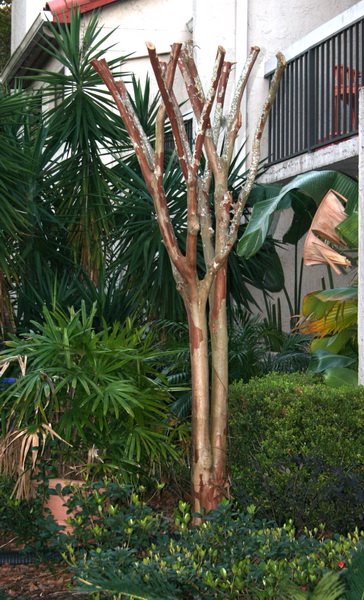 At Leu there are quite a few different ones including the Lagerstroemia calyculata whose pod I have drawn and another Lagerstroemia macrocarpa.
The drawings of the pods compare the size of the ordinary little street crape myrtles and the much bigger pod of the Lagerstroemia calyculata. I also made a quick sketch at Leu a couple of weeks ago because there are two crepe/crape myrtles which stand by a path nicely silhouetted against the dark green oaks. Some people I know think they are ugly in this state but I like to see their structure and tracery. Another reason not to be so quick to prune is for the sake of the birds who love the seeds..and for artists who like to draw them. 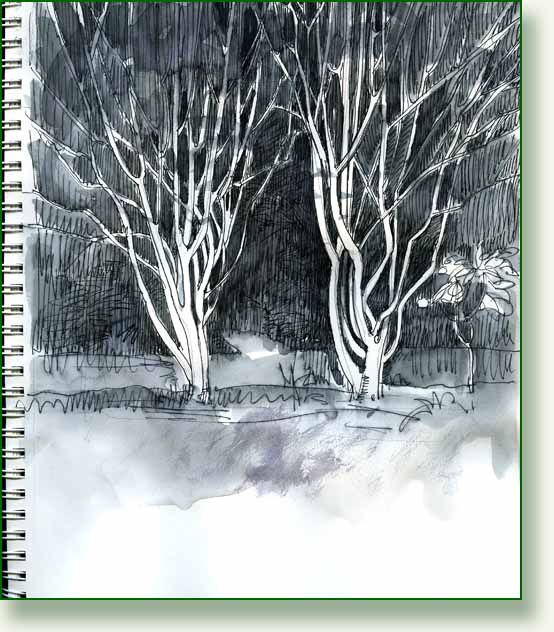 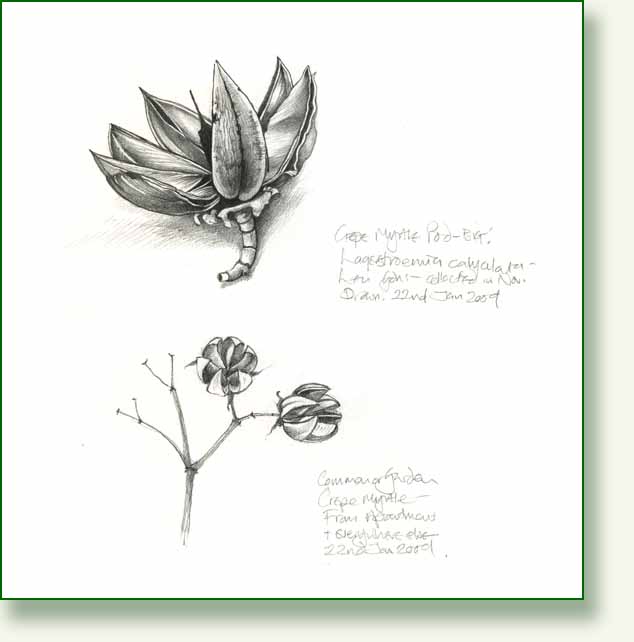