Leaf of the Day: My Orchid Flower Buds

Today I decided to draw the flower buds of the orchid, I do hope it manages to survive. I would like to make a series of drawing of the flowers. I have a suspicion that now I have “noticed” it and am giving it some care and attention, it might just turn up its toes. Like my paintings some of my plants are are better left alone. This particular plant seems to have spent most of the summer trying to escape its pot and the other one has embedded its rather strange snaky roots in the wall.

I have never been quite sure about orchids. My memories of them from years ago in the UK are of rather waxy lifeless things that were imported in their glass tube stem holders for weddings or other “occasions” But seeing them growing here in the wild has changed my mind and having encountered a few different varieties now I am beginning to understand the obsession that overtakes some growers. With over 20,000 different wild varieties there are plenty to collect. I do still find them rather sinister and I am not entirely sure why. Perhaps it’s because those strange little “faces” have a watchful air about them. But there is definitley an appeal and I am fascinated by the long slender flower buds of this variety, the longest is 3 inches long.

Recently I have been reading “The Plant Hunters” by Tyler Whittle, an interesting history of those brave, intrepid and sometimes seemingly insane men and women who travelled all over the world looking for rare species. He recounts how the famous but particularly bandit prone, orchid hunter, Benedict Roezl, narrowly escaped death.
In his seach for new species he travelled extensively and travelled light, so much so that
“one band of Mexican bandits appeared to be so exasperated to find that he had barely anything except his horse, his clothes and bundles and bundles of weeds that some of them were inclined to cut his throat. The knives were out when the chief held up his hand and bade them reconsider. Could this weed collector be sane. They eyed each other. It was bad luck to cut the throats of lunatics. If a man was so crazed as to wander the countryside gathering flowers and grasses and bits of trees he must surely be under the eye of God. This anyway was their happy conclusion and being in need of good luck at that time they cheerfully let Roezl go, piously crossed themselves and rode off to rob someone else.”

I am bearing this in mind now as I brave the bandit infested streets of Winter Park on my trips to and from the Gardens. It is comforting to know that my (mild) lunacy and back pack full of twigs and leaves may save me from the gun toting criminals…or is that slightly optimistic?
____________________________________ 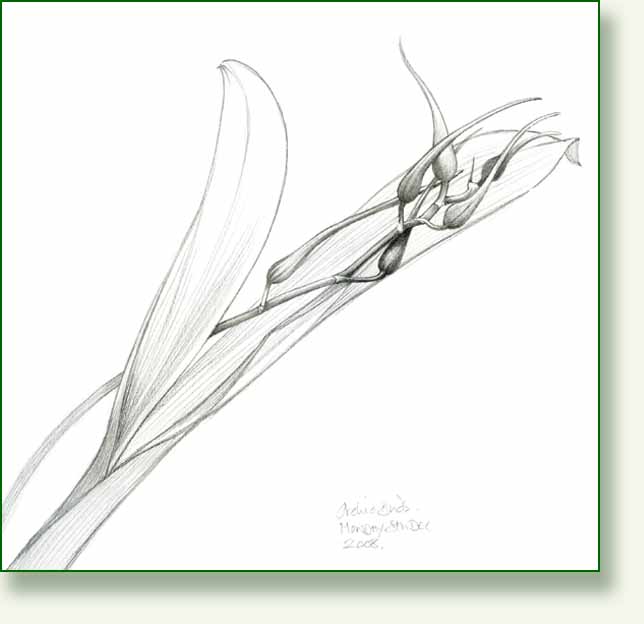