Leaf of the Day. Pomegranate

My decision to go out today was thwarted by rain, so I spent most of the morning wondering what to do. When the sun came out I got as far as the supermarket and bought two big pomegranates. Then spent the rest of the day not wanting to paint them. They are just too complicated, too complicated and too beautiful. I broke one open and then just looked at them for some time. Eventually I did get round to a few sketches which, as all artists will tell you, is better than nothing.
I would love to be able to paint a beautifully detailed pomegranate with all the richness of colour and the intricacies of the seeds but it is a long job and I will maybe have another attempt later this week. I am also daunted by the many artists who have painted pomegranates before, and so very well.
My eye, hand, brain coordination is still not quite up to scratch. Also when I look at certain subjects, I think this or that would be better in either oils, acrylics, pen and ink. etc. I would probably choose oils to do the pomegranate justice.

Some time ago I heard a wonderful story about James Brett, a very interesting man who, in short, after an extremely difficult start in life discovered a taste for pomegranates in Pakistan and developed the UK market for pomegranate juice. “Pomegreat” . Over the last couple of years he has been trying to persuade the Afghan farmers to grow pomegranates instead of poppies.
Here is an extract from the article in the Guardian from written by Mark Collins from August 3rd this year. Read the whole article here

‘Pomegranates are the answer to all this,’ said James Brett, as we drove past the colourless, mud-brick villages and makeshift graveyards that litter the parched landscape of Nangarhar province. We were on our way to Markoh, a small village 40 minutes’ drive inside the Afghan border with Pakistan. Brett first visited Markoh in April 2007. On his way to a seminar in Kabul, he had asked the driver to stop the car so that he could speak to a reed-thin figure extracting opium from the poppies.
‘My translator told me not to do it. He said “you’ll get shot”, but I just felt like the first step had to be made that day.’ That ‘first step’ was walking into the field to try to persuade the farmer to stop growing poppies and start growing pomegranates instead.
After the initial shock of seeing the large red-headed man striding through the field, the farmer agreed to stop cultivating poppies if Brett guaranteed to subsidise both him and his family until the pomegranate trees were grown and ready to harvest – a period of three to five years. Having launched his pomegranate juice on to the UK market four years previously, Brett was keen to find good fruit and plough the profits into increasing production. His argument to the farmer that the crop would return two-and-a-half times what he got for the poppy harvest proved a compelling one. 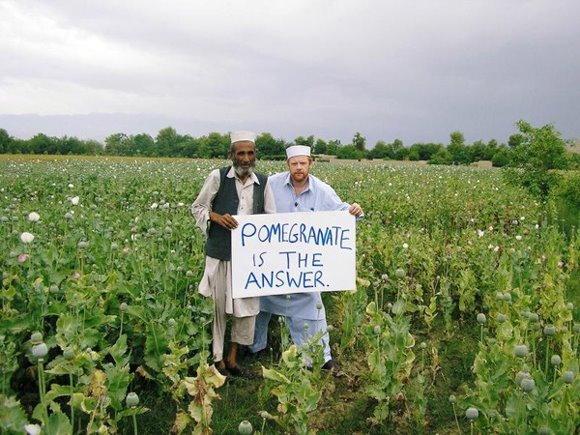 The article goes on to describe Brett’s meeting with the tribal chiefs..

“400 tribal chiefs and elders were sat cross-legged in an orchard under two brightly coloured marquees. No one from the outside world – English or otherwise – had spoken to a gathering of these people before. All eyes were on Brett as he walked to the podium to speak, wearing a traditional Pathan hat and a long white jacket embroidered with red pomegranates.
He promised that he would help to raise money for the project and find markets for the fruit if they pledged to stop growing poppies. After several hours of deliberation, the elders made a historic decision, agreeing to cease poppy cultivation in the province from 2009. Nangarhar would be poppy-free for the first time in 100 years.
Later that day Brett led a crowd back to the same field he had walked into a year earlier. The poppies had gone. The farmer was now standing under a sign that read ‘POM354 – this site has been acquired as an initiative of alternative livelihood’. Brett shook hands with the farmer and planted the first pomegranate tree in the dry earth.

Here is a photo of Brett in his wonderful coat, from this historic meeting from his site POM 345.. here . Do go and read a little about this initiative to replace heroine with pomegranates. It is an inspiring story. 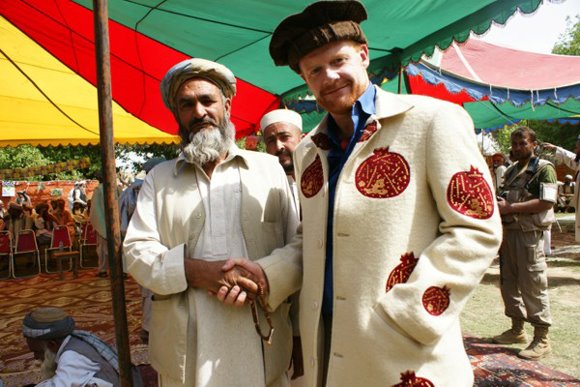 I had heard the interview with James Brett on Saturday Live BBC radio 4, 11th October which can still be heard here .
A footnote.. His company have also started marketing Anari pomegranate wine which allegedly leaves no hangover!! .. read more here

And thankyou all for your get well wishes. This is obviously a global cold, but it is enjoying its stay in Florida a little too much. There is an old saying that fish and guests go stale after three days… colds should be added to that. 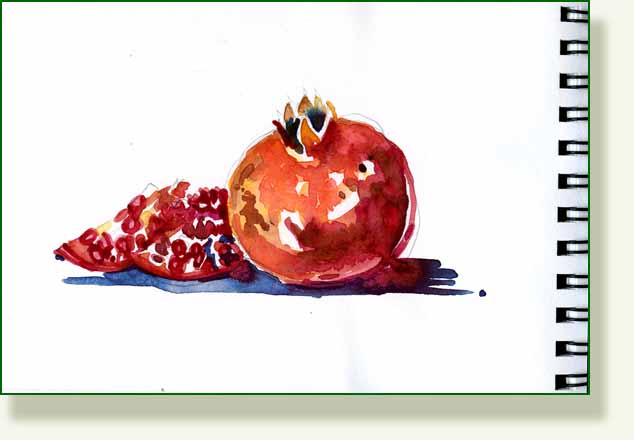 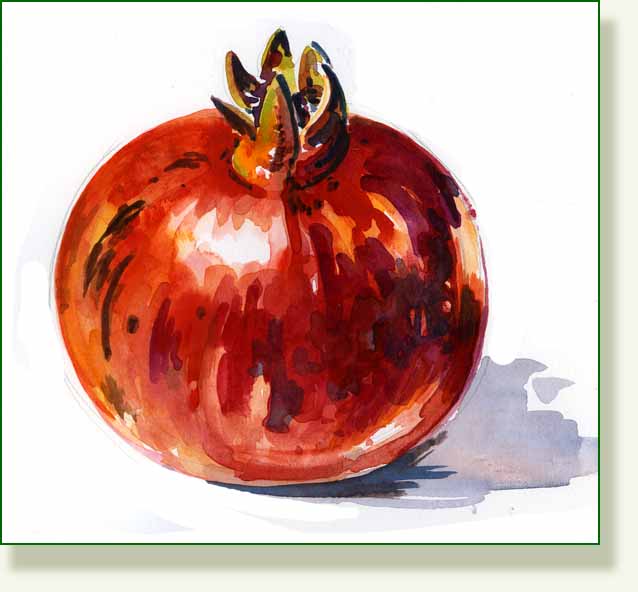 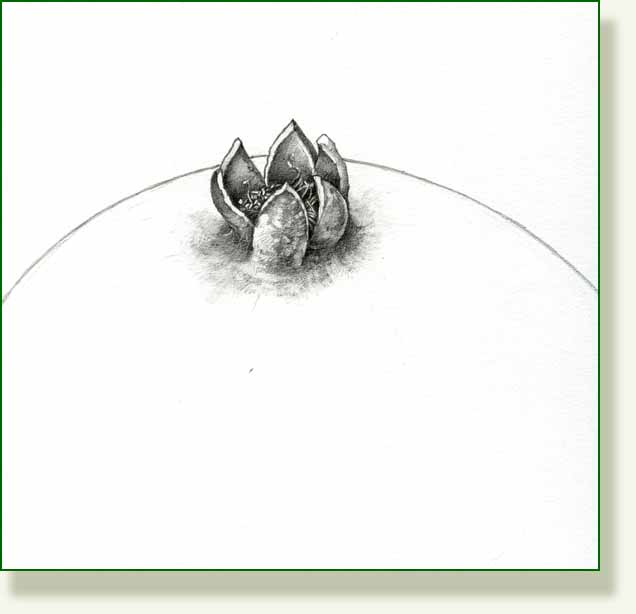