Leaf of the Day: The Hysterical Lime

At last today I went back to the Gardens, where life continues, immune to the coughs and colds of us mere mortals. It has been two weeks. I was not missed by the plants, they have done very well without me, better than I have done without them. It was lovely to see them all again.

I had one mission today and one only .. to look for the Kaffir lime.
It was almost the last citrus I looked at and found it with the help of my good friend Pedro. I couldn’t quite remember the Latin name hence the “hysterical lime”, but we did eventually find it, confusingly labelled as the Mauritius Papeda, but they are one and the same thing.
This is Citrus hystrix, Kaffir limes are also known as Kieffer limes, Thai limes, porcupine lime or wild limes, and are a fundamental ingredient in Asian cooking particularly in Thai curries. 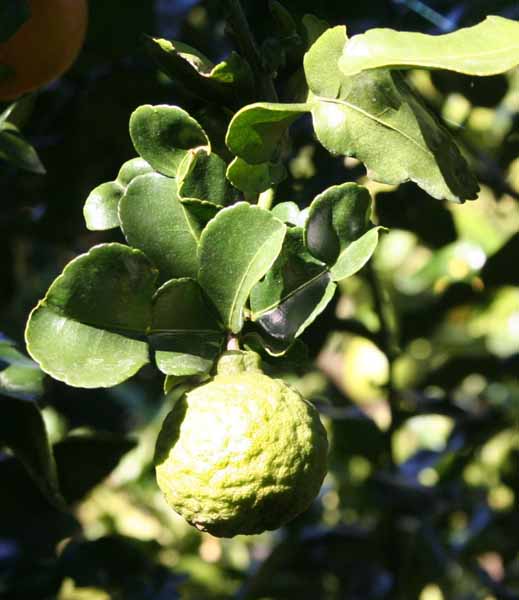 I took this rather too contrasty image of the little lime today at Leu. You can just see the tiny pale spots on the leaves which hold the beautiful aromatic oil.

There were two reasons for looking for this lime, firstly it is a fruit and fits in with my task for the course and secondly because I have recently been corresponding with Patrick Gozon from the Philippines who has revived one of his blogs to write about his native trees.
” Lately I have been doing my graduate thesis on the use of Philippine native trees and shrubs in landscape architecture. I have found that our native flora is as interesting as any other plants from other parts of the world. ”
He writes very informative and interesting accounts of the trees and his quests to find native species and keep them going.
http://www.pinoytrees.blogspot.com/.

I am particularly interested in the Filipino flora because my best garden friend and mentor, Pedro, is from the Philippines and tells me so much about his beautiful country. He was delighted to learn of someone caring for and trying to preserve the native plants.

Patrick suggested that I look into the Kaffir lime particularly in respect of the leaves, after we has been discussing the little Calamondin orange which I had drawn back in March here. The leaf, as well as being an essential for cooking is a hourglass shape, almost like one leaf split in two and the Spanish for the Kaffir lime is hoja de ocho figure of eight leaf.

One of Patrick’s posts is about places in the Philippines that were named after plants. I particularly like the one about the disappearing saint which was always found in the same tree, but here is the one about the Citrus hystrix.
“Cabuyao in Laguna was named after the Kabuyaw tree or Citrus hystrix The town was formerly named Tabuko. But when a Spanish friar crossed the Bai lake (which is now Laguna de Bay), he landed in the town and immediately asked some women on the shore what the name of the place was. The women misunderstood the Spanish visitor and thought he was asking the name of the trees abundant near the shore, and they said kabuyaw. From then on the town of Tabuko became Cabuyao. But today, there are no full grown trees of kabuyaw in Cabuyao. I went on a field trip to find kabuyaw and saw only a lone tree in the town of Calauan but I heard that some could still be found in Mts. Makiling and Banahaw.

It made me think about how much we used to use trees to identify places, but that was in a time when people knew more about trees.

His current post is “Searching for the Elusive Samuyao”, which is
“a dwarf citrus appearing like a cross between kalamondin (calamansi – Citrofortunella microcarpa) and makrut (kubot or kabuyaw – Citrus hystrix). In references, samuyao was described as a small shrub used by locals as a shampoo or conditioner. Literary verses in Cebuano would carry romantic tones like ‘ her hair smelled of samuyao scent’.

This little lime I have here is so beautifully aromatic. If you press your fingernail into the rind the aroma is lemony and menthol and so strong. These too were used for shampoo and general household cleaning. I read that one tree would keep a household clean and washed for a whole year. It’s absolutely gorgeous and I have spent the afternoon chewing a leaf too. It is grown primarily for these dark shiny green leaves that give a perfumed citrus flavour to soups curries or salads. The fruit do not have much juice but the zest is used (sparingly ), and slices of the fruit are sometimes served as a condiment.

More about this and other interesting citrus from Leu soon. I found every kind of quat.. kumquat, limequat, sunquat etc. There are many varieties of oranges, limes, pummellos, tangelos and grapefruit.( I didn’t realise the Latin name for grapefruit was Citrus paradisi..). There are Wampee and Yuzu bushes and the mysterious Etrog..all quite amazing and I couldn’t have imagined a nicer way to spend a cold-convalesceing day than mooching about a citrus grove in the sun. 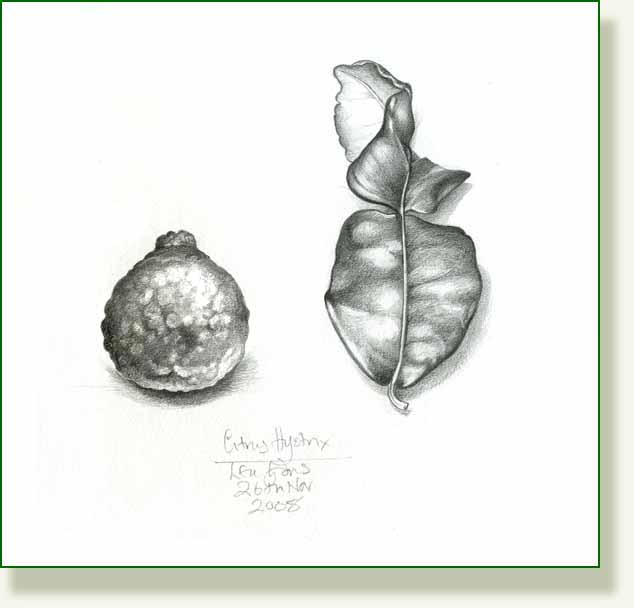