Leaf of the Day: Indigo.

The Indigo tree is simply beautiful. In the slanting morning sun the tiny flowers on their upstanding spikes glow like rich, wine red garnets. This is the Indigofera australis meaning “bearing Indigo”, and this is, indeed one of the plants from which the beautiful indigo dye is obtained. There are many species of Indigofera and the dye, woad, obtained from a different plant, Isatis tinctoria contains the same chemical “indigotin.” 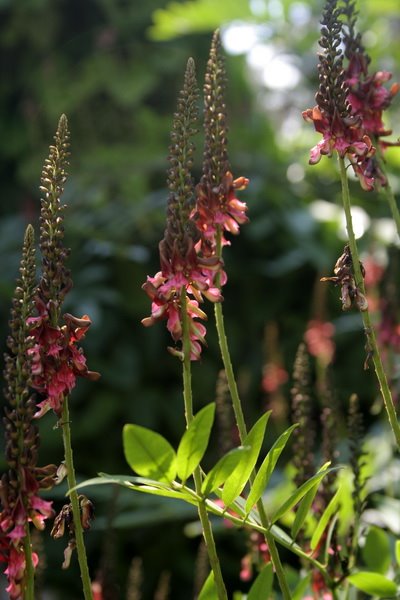 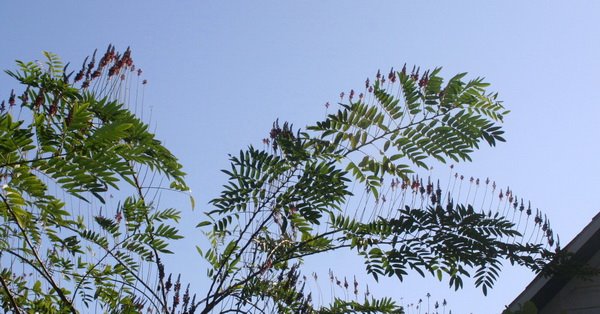 This tree is delightful with its jewelled flowers spikes marching along the top of graceful arching branches carefully descending from tall to short. It’s a simple and elegant structure, the compound leaves are alternate along the branch and each leaf joint produces its own flower. 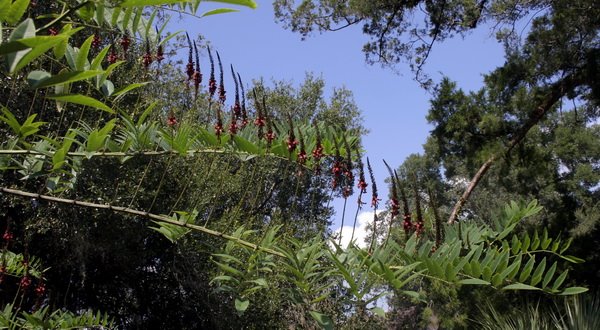 So simple but so so difficult to draw. Today was my drawing outside day but I spent such a long time just looking at the tree trying to working out the structure that I only had time for a couple of sketches and the watercolour below.
This one was just to see how the leaves and flowers relate. 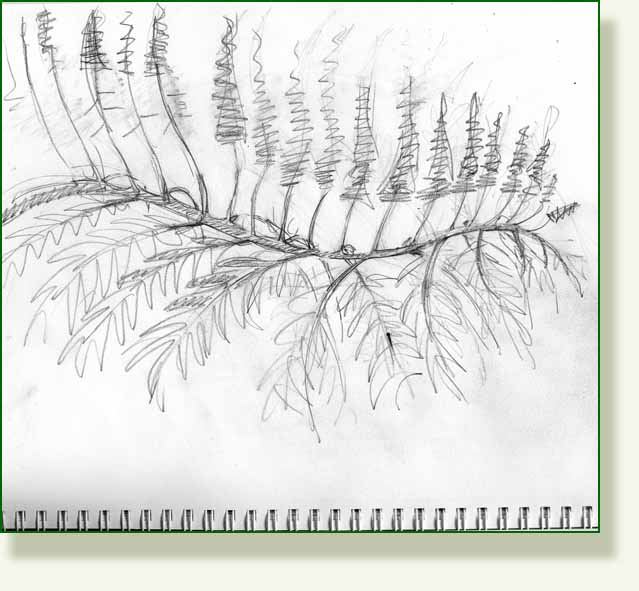 This one was to try to see the twisting rhythm lines formed by the branch, leaves and flowers. I was looking up at this one. It’s a really beautiful form. 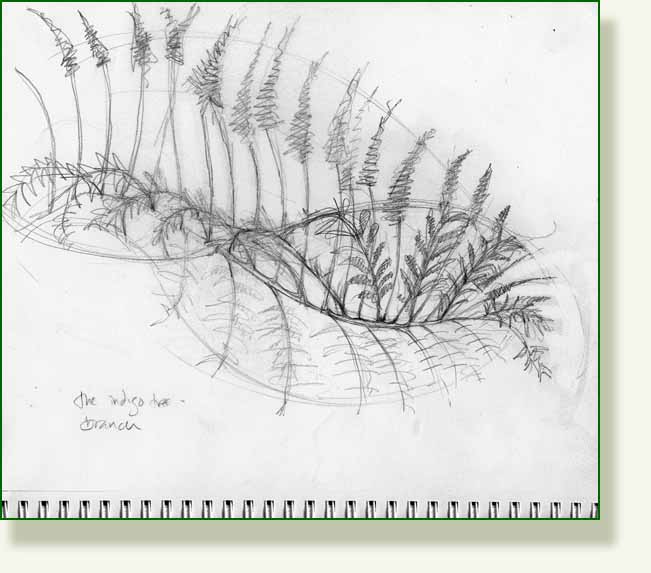 I could write pages and pages about indigo. It has a exotic history and complicated production methods. It was used as a cloth dye, and a manuscript paint from the earliest times. Today it has been largely superseded by synthetic dyes but there are still some small producers. In an article from Reuters last year journalist Daniel Flynn wrote about the decline of the famous Kano Dye pits in Nigeria. 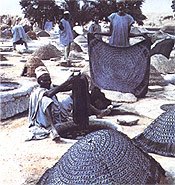 Founded in 1498, the Kofar Mata pits are said to be the oldest in Africa and are the only survivor of Kano’s dye trade — which once included 13 pit complexes. Close to the royal palace, its colors have adorned the fabrics of Kano’s traditional rulers for centuries.
Zango inherited the traditional title Sarkin Karofi, or chief of the dyers, three years ago. He still believes there is a future for his trade because the hand-woven local cotton is much stronger than imported machine fabrics, he says.
Squatting on the far side of the pits, two lean blue-robed figures, their faces swathed in black turbans, haggle with one of the dyers. “The Tuaregs still come. They remain good customers,” chuckles Zango, nodding towards them.
Known as the blue men of the desert, Tuareg of Mali take their nickname from their billowing indigo robes.
“For most customers we soak the cloth in salt and vinegar to fix the color, but for the Tuaregs we leave it natural so that when it is washed, it dyes their faces and hands blue,” said Yusuf Sani, a guide. “That is how they got their name.”
Read more here 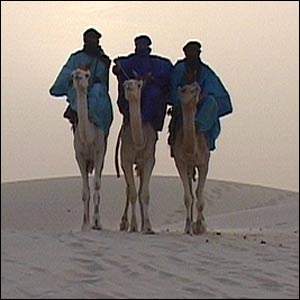 This beautifully evocative image from the BBC.

I will return to the subject of indigo soon. Its history and uses are fascinating and it is a favourite colour of mine. 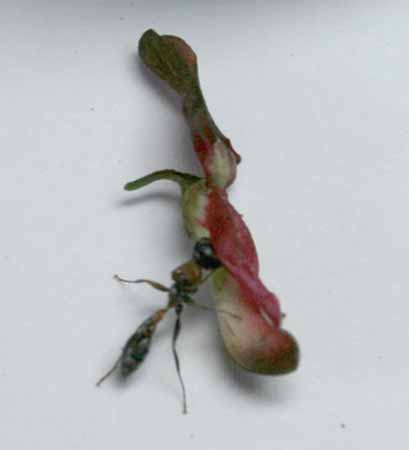 Incidentaly, Ant was besotted by the flowers.
I had taken a couple off the stem to draw and he/she/it arrived shortly afterwards and spent a long time dancing around them, performing head stands, to get at the nectar I presume, and even carrying them around for a while… impressive strength. 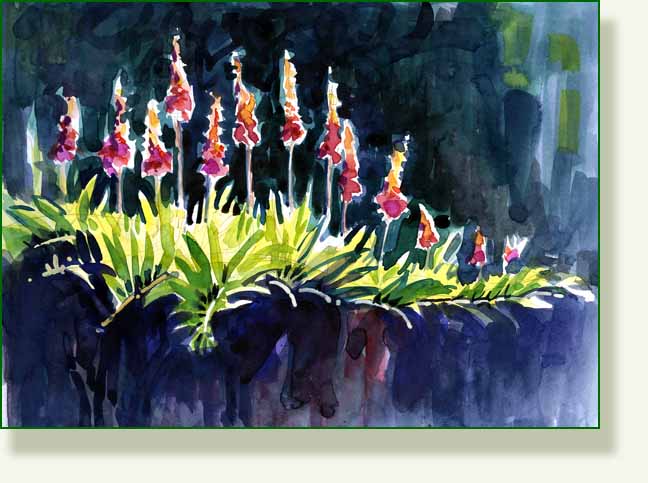 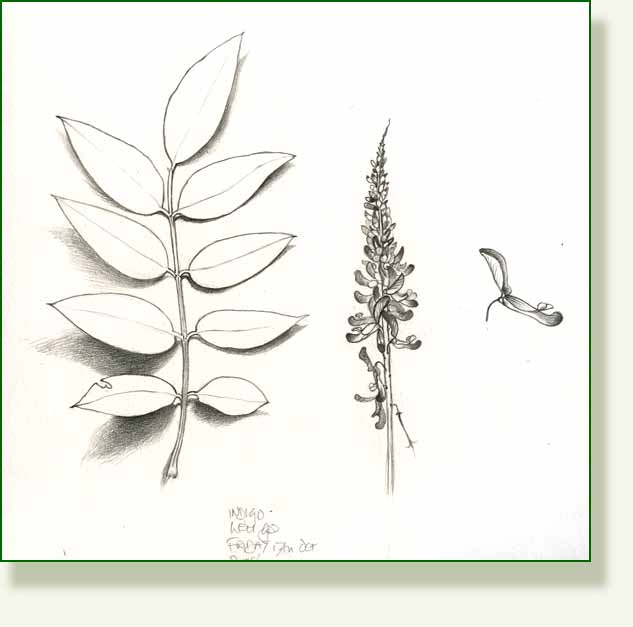