Today I was going to have a day off but curiosity got the better of me and I decided to investigate yesterday’s pod of the Balloon Milkweed. It was completely fascinating. Inside the green soft hairy pod there is a central S shaped inner pod. As the whole thing started quickly drying out, the interior pod split along its length to reveal inside many little red brown seeds, very neatly packed around what looked like a shiny silky core. The seeds quickly fell away, one by one, each taking with it one layer of the core, which transformed itself into a fluffy floating parachute. It’s very hard to describe….so I can do no better than let Anna Botsford Comstock in her classic 1911 book “A Handbook of Nature Study” for elementary school children, explain in more poetic terms.

“On either side of the seam, (of the interior pod) which will sometime open, are three or four rows of projecting points rising from the felty surface of the pod in a way that suggests embossed embroidery. Below the opening is a line of white velvet at one end and with their heads all in one direction are the beautiful pale-rimmed brown overlapping seeds and at the other end we see the exquisite milkweed silk with the skein so polished that no human could give us a skein of such lustre.
No sooner is our treasure open to the air than the shining silk begins to separate into floss of fairy texture. But before one seed comes off, let us look at the beautiful pattern formed by the seeds overlapping, such patterns we may see in the mosaics of mosques. Pull off a seed and with it comes its own skein of floss shining like a pearl; but if we hold the seed in the hand a moment, the skein unwinds itself into a fluff of shining threads as fine as spider’s silk and each individual thread thrusts itself out and rests upon the air and altogether there are enough of the threads to float the seed, a balloon of the safest sort.

Soon the outside of the pod had shrivelled and the fluffy white seeds had exploded out onto the table and were busy drifting off around the room.
It was all so quick that I couldn’t draw it fast enough. 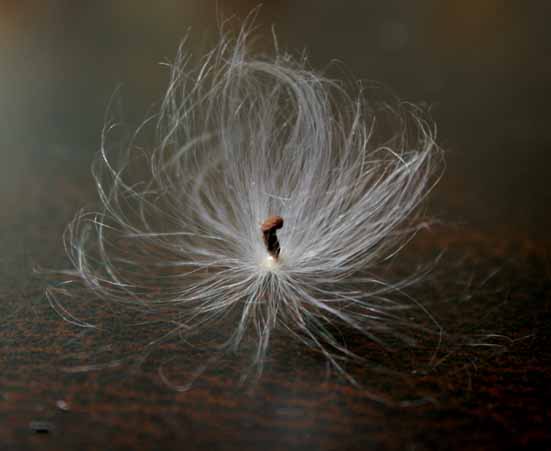 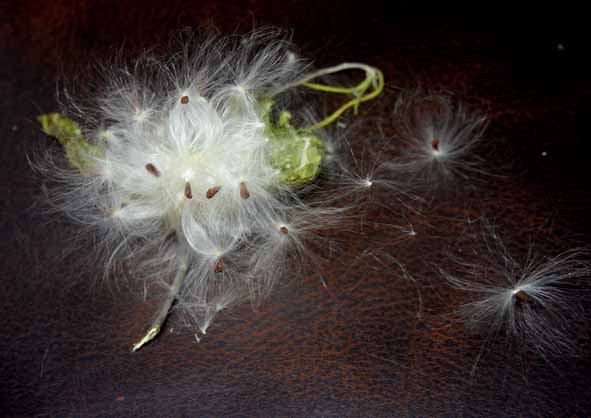 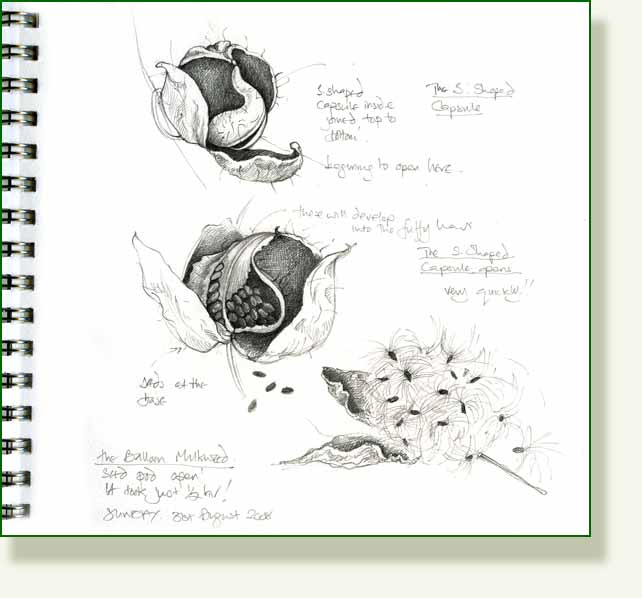