Leaf of the Day: The Goldfinger Tree and Sun

This morning the sun was shining. The windows were thrown open and warm breezes flowed through the house, lifting the sense of damp and everybody’s spirits too. Delighted, I cycled down to Leu where, instead of the normal Sunday morning solitude, the gardens were full of people, all so pleased to be outside in the sunshine again.

On the way I was able to see what Fay had done to the parks and gardens, with leafy debris littering the streets and the occasional fallen tree. My cycle route takes me round Lake Sue where the decks of the jetties, which usually stand high out of the water, are marooned, their wooden walkways to the land invisible under inches of water. In both Mead Gardens and Leu Gardens low lying areas are flooded making wonderful fleeting watery worlds which I used to love when I was a child. There was something magical about paddling through the waving underwater grass in those temporary lakes and at Leu a beautiful big Red Shouldered hawk was standing by the edge of one of these newly formed ponds, seemingly admiring itself in the waters.
I did take a photo but only from a distance, just enough to identify it, so here is a perfect image from Audubon… complete with Spanish moss which Fay has draped all over Orlando. 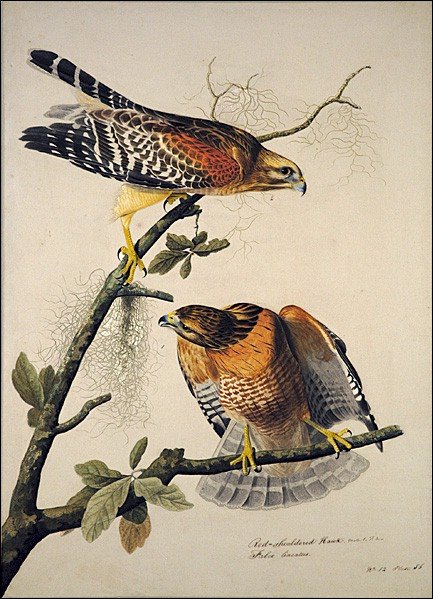 There was not too much damage at the gardens, one or two trees had lost branches and of course, for me, there were plenty of fallen things to find, one was the curiously beautiful flower of the Gold Finger tree Juamulloa mexicana. 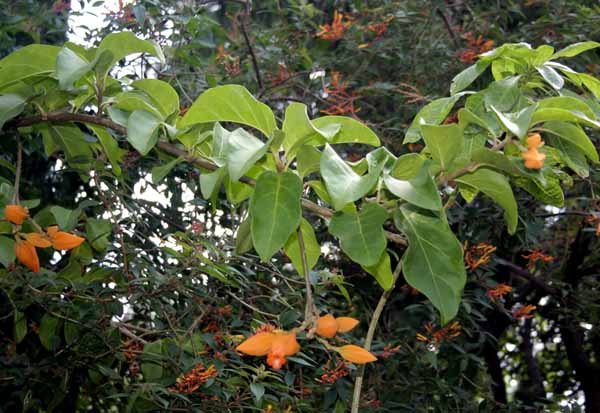 This unusual plant which originates from Central America can be either a shrub or climber. It was described by one site as a hemi-epipyte which is a plant which spends some of its time as an epipyte growing on a host, before sending roots down to the ground, so it can grow quite happily on a tree or in the garden. These waxy orange yellow flowers form at the ends of the branches and it is apparently a member of the potato family. This tree at Leu is growing in the ground but leaning on a large palm for support.
The flower is in two parts with an orangy bract with a red flower.
_____________________________________ 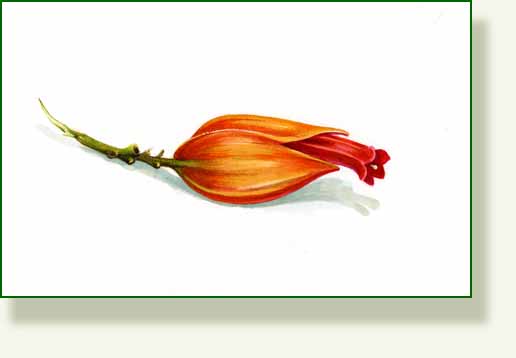