Leaf of the Day: FishTail Palm and Jaggery

Sunday. Rain was promised later so we made the most of the morning sun and cycled all around some local areas we had not explored before. Three hours later, we returned just before the storms. We did get just a tiny bit lost amongst the lakes and tree lined streets of Maitland, but found the Maitland Arts Centre which looks very interesting. I am hoping for perhaps a course or two and maybe some artistic contact and I think there is a foundry nearby too. I can feel the old sculpture itch coming back..oh dear.

Todays drawing is probably the smallest compound leaf I could find from one of the fishtail palms at Leu. When you first see a fishtail palm you would be forgiven for thinking that all the leaves had been damaged, torn or severely attacked with pinking shears. They always seem to look ragged and untidy and if exposed to too much sun the leaves turn brown at the ends, looking as though they really need either some TLC or digging out completely. If you decide to take this latter course of action it won’t be easy, as these big palms fight back. Not only is their wood terrifically hard so they can resist even a chain saw, but their seeds, which they produce in profusion, are very toxic and contain severe skin irritants.(Calcium oxalate crystals). The symptons are, burning and swelling of lips, mouth, tongue, and throat; difficulty of speaking. Redness and swelling of skin and eyes after handling berries, with severe pain in the mouth if eaten.

All these dangerous qualities would not really bode well for using this plant for food stuffs of any kind but the sap of some the caryotas, particularly Caryota urens also known as Toddy palm, is used to make an unrefined sugar called jaggery or gur, and also to make palm wine. In Burma, the translucent white syrup is boiled until it becomes golden brown and referred to locally as Burmese chocolate. It is also made into bite-sized pieces which are served as a sweetmeat with green tea. The sweet little squares may include shredded coconut, plum puree or sesame. They sound delicious. Palm wine or Toddy, is made from various palm trees and I will return to it another time but one of its attractions must be that is can be ready to drink in 2 hours! I would also like to know if the Scottish “hot toddy” was named after this drink or the otherway round.

This ragged edge is very much part of the design of the leaf. This particular one is the Caryota misca and of course their nickname “fishtail” comes from the jagged or “chopped” appearance just like the tail of a fish. They are also unusual in that they have a bipinnate leaf rather than one big leaf with a central stem. “Bipinnate” means that the leaf stem has secondary branching stems (pinna) with leaflets. The one I have drawn is a young leaf, with 5 leaflets on one pinna. 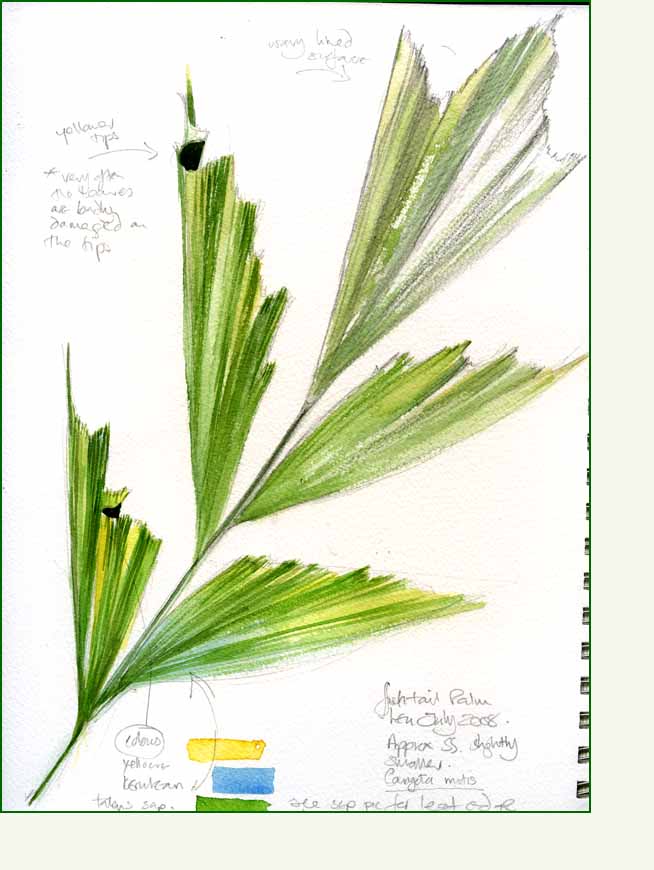 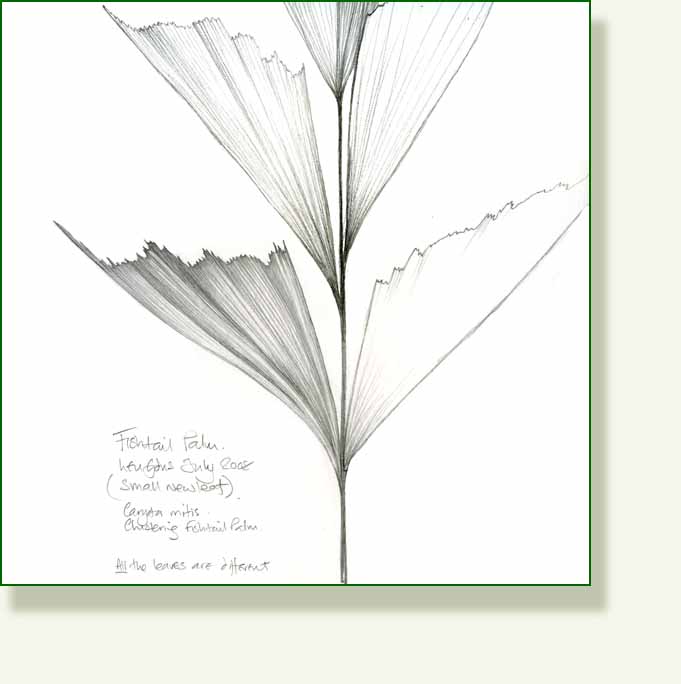