Leaf of the Day: Bromeliads

Sooner or later I had to tackle this group of plants. From big and beautiful, to tiny and intricate, bromeliads are everywhere in Florida. I could probably devote the rest of my life to drawing them.
There are over 3000 species in the group, and they are as diverse as the strange hanging Spanish moss which drapes itself over just about everything here, to the big bold patterned leaves of the ‘tank’ bromeliads. 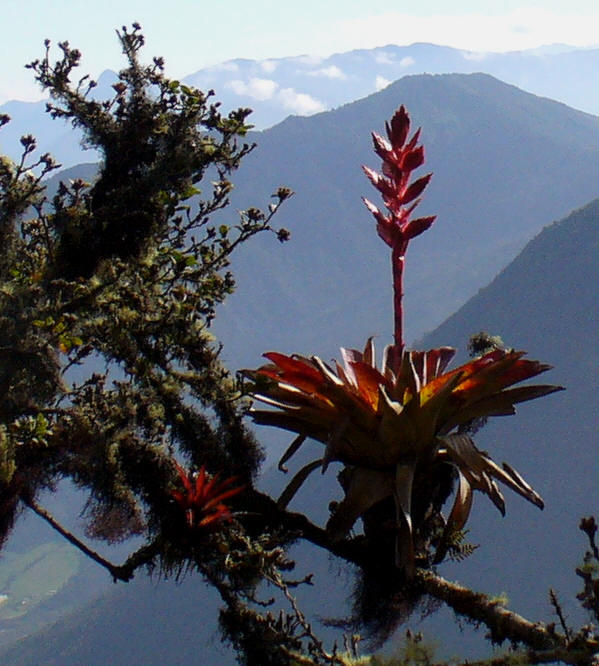 This stunning image is one of many from Ecuador Images.net

Bromeliads are mostly epiphytes, ie plants which grow attached to another plant. The word is derived from the Greek, epi (upon) and phyton (plant). These plants do not take their nutrient from the host but use it as a support, using their roots only to anchor themselves, their energy derived from from photosynthesis and their moisture obtained from the air.

The tank bromeliads in particular have an extra food collecting mechanism. At the centre of many of these bromeliads the leaves join together to form watertight ‘tanks’ (properly know as phytotelma) which gather water (up to 20 litres in some larger species) and litter from falling leaves and general forest debris. These neat receptacles absorb the captured rainwater and nutrients from decomposed litter and also form a housing unit for a bizarre community of aquatic and other creatures, such as salamanders, frogs and spiders. The waste products of all these creatures, along with the bodies some of their victims and no doubt the odd drowning fatality decomposes to feed the plant. These bromeliads are not really thought of as carnivorous as they don’t actively seek their prey but, rather, are opportunistic and thrifty, making the very best use of what nature throws their way.
There is however one species which is somewhat more designed to ‘catch’ its food. It lives high up in the rainforest canopy and has specially adapted powdery leaves which reflect the sun’s UV rays making it almost invisible to insects who blunder into the leaves, fall into the strategically positioned tank and are unable to climb out due to a wax coating on the leaf bases. 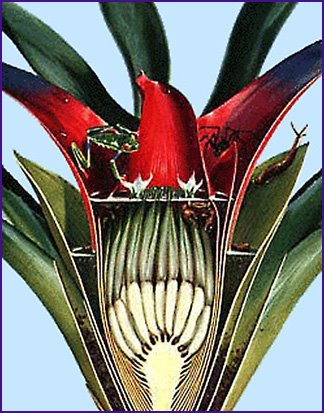 This very good cross section illustration is from the University of Florida’s site all about bromeliads here . You can see the water trapped in the phytotelma and the little community of wild life, frog, spider and slug.

In Jamaica there is a specially adapted tiny crab (Metopaulias depressus)which has left its low altitude home to live the high life up in the forest canopy in the tanks of the bromleiads, normally Aechmea
paniculigera. Its whole life cycle is conducted there and there is a symbiotic relationship between the plant and crab as the mother crab tidies up its watery leaf home, removing debris therefore improving the oxygen in the water and adding empty snail shells to improve the Ph balance. Quite astonishing.

I am only just beginning to learn about this huge and fascinating family of plants. The leaf I drew today is, I think, from one of the Aechmea bromeliads. They characteristically have spiny edges to their leaves some of which embedded themselves in my fingers.
This leaf is, by bromeliad standards quite modest in its pattern. I am limited to size as I have to paint 8 leaves on one A3 sheet. Some of the more boldly patterned ones are much bigger and will have to wait till later. This will be quite enough of a challenge to paint as it is… you will see the results in about a week. I made some preliminary sketches before the more detailed drawing, just to get the feel of the twist in the leaf which shows off the pattern on the back nicely.
_____________________________________________ 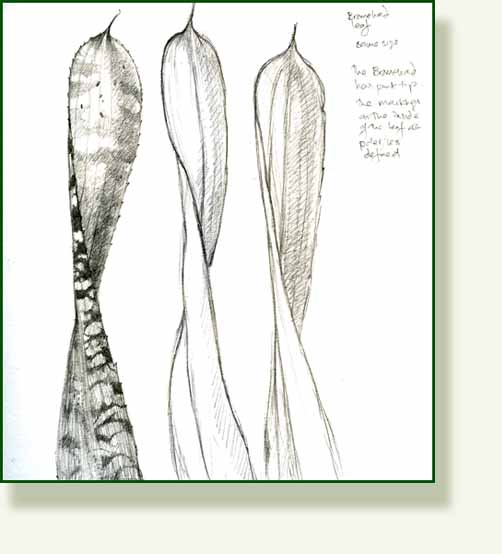 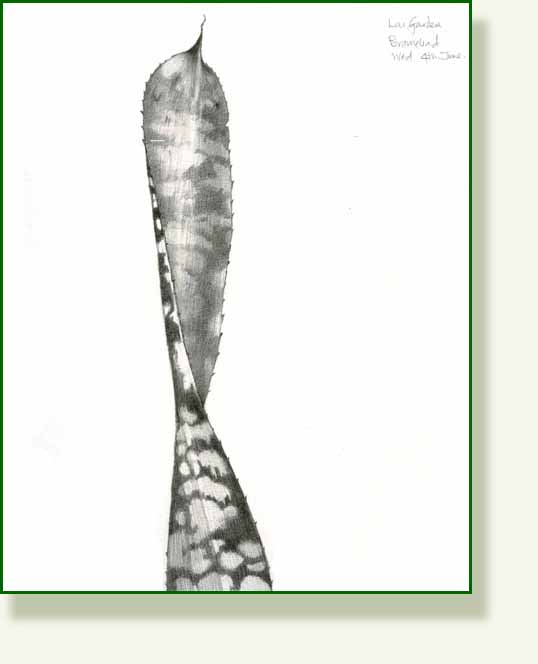