Leaf of the Day: The Ballistic Bauhinia Pod

While looking at the Bauhinia trees last week I noticed that the ground around one tree in particular was covered with many pieces of curled seed pod and little disc shaped seeds. I do like seed pods and so I brought a few bits and pieces back. Most of them were in separates halves but this one was complete albeit without its seeds. On returning to the apartment I left them in a bowl water to clean them up a bit and to get rid of a few unwelcome bugs. When I later retrieved them, my lovely curly pods had flattened out completely but, of course, as they gradually dried so they curled up again demonstrating very nicely the “ballistic” method of seed dispersal.

The long flattened seed pods of this bauhinia apparently have layers of woody fibres which are laid at an angle to the edges of the pod. As the pods ripen and dry, the fibres pull against each causing extreme tension until the pod fractures explosively from the tip down, causing the the two halves to corkscrew, firing the seeds off to find their fortune elsewhere.
In this ballistic method of seed dispersal, the bauhinia is something of a champion, the exploding pods able to throw the seeds as much as 50 feet.

Of course for a big tree like this bauhinia it makes sense to get your offspring as far away as possible so as not to compete for space and food.
I have friends who would really like to employ this effective technique to encourage some their long term, stay at home children out into the world! 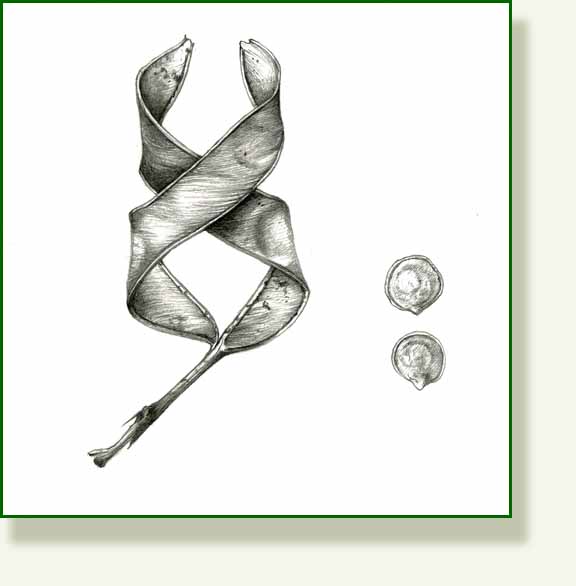