The day of the Embassy visit for the my USA visa which after a 3 hour wait was, I am glad to say successful. London is hot and beautiful, I walked from my hotel in Gower St along the Mall and through St James’ Park and dropped into the Mall portrait exhibition and on to the Amazing Rare Things exhibition housed in the Queen’s Gallery at Buckingham Palace.

The exhibition was wonderful, the Leonardo drawings were especially exquisite and so tiny, and the fierce upside down sloth that I mentioned in a previous post was there too.
Mark Catesby’s work was particularly interesting to me as he drew and painted in Florida in the early 1700´s. He was another of those early and dedicated painters who recorded the natural history of America with both skill and charm. For me, again, the attraction of his work is in the combination of the study itself, with some aspect of of its surroundings or a companion plant or insect. He was a self-taught artist who travelled to America from England with the help of both a small legacy, and his sister who was married to the secretary of the Governor of Virginia. His comprehensive notes watercolours and collected specimens of the flora and fauna were the basis for his great book of engravings.
Making his watercolour studies directly in the field he later said that

‘In designing the Plants, I always did them while fresh and just gather’d: And the Animals, particularly the Birds, I painted them while alive… and gave them their Gestures peculiar to every kind of Bird…’.
He had a particular problem with fish
” which do not retain their colours when out of their element, I painted at different times, having a succession of them procur’d while the former lost their colours.”
but the resulting painting of the Great Hogfish was probably worth the sacrifice. 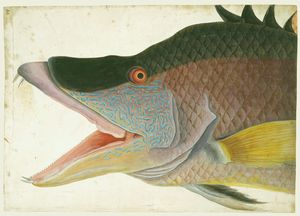 One very poignant drawing of his is that of the passenger pigeon, once so numerous that huge flocks containing millions of birds flocks flew over the prairies of North America, but with human settlement this once numerous bird suddenly declined and sadly the last lonely passenger pigeon name Martha died in Cincinnati Zoo in 1914.. 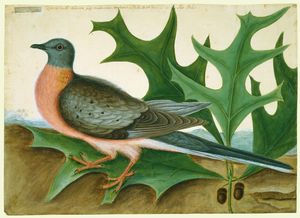 Maria Sibylla Meriam’s work is superb..the detail incredible and the design very idiosyncratic. I will return to her in another post but the exuberant spectacled caiman tangling with the coral snake has to be one of the most arresting images in the exhibition.. wonderful. 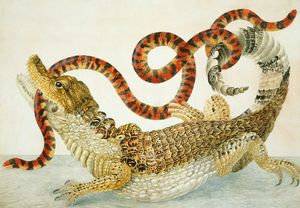 Also, there is work by Alexander Marshall from his wonderful 30 year project, his floreligium, which again, I will get round to exploring in more depth.. but with my great affection for all long dogs this had to be my favourite drawing of his. 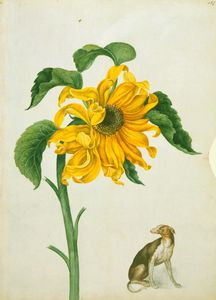