Leaf of the Day: Yaupon Holly, and a liquor that sorts the men from the boys

Today I have started a week of sketching at Leu Gardens. I spent quite a long time just looking at the colours and mixing up appropriate greens and I did manage a couple of sketches which I will post later this week. Last week I was looking for Yaupon Holly in the garden, which I assumed was going to be something like an English Holly. It is, in fact nothing like an English Holly. It has tiny pretty leaves and they are not prickly! With directions from Tony and Cecil I found two trees. One a pretty weeping variety, which was covered with pretty orangy red berries and the other one, the native yaupon tree.
I have been curious to see this tree after reading about the Black drink in the book I have borrowed from the library about Jacques Le Moyne the 16th century artist and adventurer who I mentioned in an earlier post here .
Le Moyne arrived in Florida in 1562 with a French expedition and started recording the lives of the Native Americans. Things didn’t go too well for these early settlers who were ousted by the Spanish after 2 years and Le Moyne had to flee for his life after most of his companions were killed by Spanish forces. His original drawings were lost in a fire but when he arrived in England he was commissioned by Walter Raleigh and collaborated with an engraver Theodore de Bray to produce a series of extraordinary illustrations recording the lives of the Timucua tribe of Indians in northeast Florida. The legitimacy of Le Moyne’s hand in the works is now questioned but they remain some of the very first images of the New World and its people to be circulated in Europe.

The particular reason for his mention in this post is that in one engraving “An Indian Chief in Council”, a circle of men are gathered round and being handed a liquid to drink from shells . The drink is the “Black Drink”, made from the Yaupon Holly..the Latin name is Ilex Vomitoria which should alert you to some of its properties!
The Timucua people had a ceremony in which, to prepare for hunting trips and other important tribal matters, the highly caffeinated cassina tea, brewed from the leaves of the Yaupon Holly was served. The caffeine content was so high that it induced vomiting in many and it was thought that the ability to hold your drink, and your stomach, showed you were fit and able to withstand the rigors of hunt or battle. In lesser quantity, and strength cassina was served as a drink of friendship and alliance..allegedly. Caffeine was a prized commodity and yaupon holly was traded as was tobacco… I wonder if Good Queen Bess ever sipped a afternoon cuppa of Ilex Vomitoria?.. if so I bet she held up well. 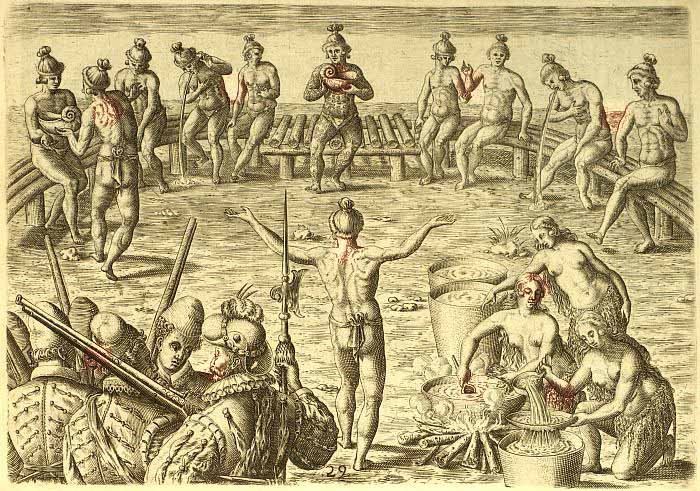 This image is from the University of South Florida’s excellent website “Exploring Florida” here. It shows all the engravings and beautiful details too.

The figures in this slice of Indian life looks quite odd to us now but De Bray, not having seen the Timucua people himself, was basing his idea of the human form on contemporary 16th century European painting and, of course, the fashionable body shape of the day, so all are well muscled-up, the girls draped languidly around their boiling cauldrons while the chaps are assuming artistic and classical stances even when being sick. I think the reality was somewhat different.

The whole set of engravings are completely fascinating and sometimes rather greusome..but well worth a look.
This, then, is the innocent looking little Yaupon Holly. Should I feel myself flagging tomorrow I might consider chewing on a leaf or two…it might well improve the drawing. 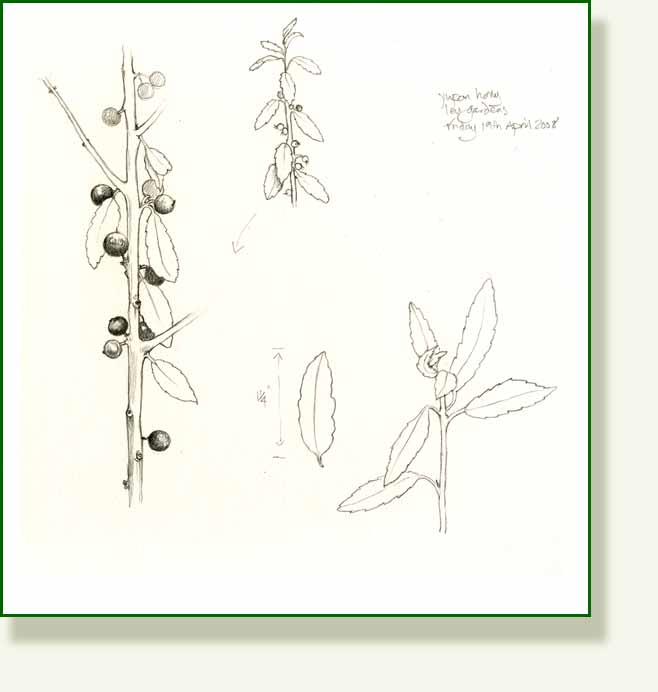