Synchronicity in Sarasota and Fangs & Flippers

Day two in Sarasota and the course is going very well. We are learning so much about colour and the chemical constituents of paint which in the past I have never really got to grips with. Sue is an excellent teacher and sets a cracking pace. I may be able to post a couple of photographs later this week.

Back at the hotel I have my two books ( Jung and Bartram) and Internet access. I tuned into BBC Radio 4 and lo and behold Book of the Week is readings from :
“The Brother Gardeners: Botany, Empire and the Birth of Obsession” By Andrea Wulf,
Her book ‘traces the history of the gardening revolution of the 18th century, led by a group of explorers, botanists, collectors, and plant dealers:
Philip Miller, head gardener of the Chelsea Physic Garden and the author of The Gardeners’ Dictionary
Peter Collinson, collector and merchant, who together with American farmer John Bartram ( father of William) brought American plants to England
Carl Linnaeus, the Swedish botanist who classified the natural world and invented a standardized botanical nomenclature
Daniel Solander, who joined Joseph Banks on Captain Cook’s Endeavour.
Joseph Banks, who exchanged his life as a rich gentlemen for that of an explorer, becoming in turn one of the most influential men in Georgian England. ‘

All these wonderful people I have been reading about… How very nice.
Jung coined the word syncronicity to describe what he called “temporally coincident occurrences of acausal events.” ..well it’s certainly a coincidence.

William Bartram illustrated his writings with delightful drawings ..here is one, nature red in fang and flipper. A lotus pod and unfortunate frog from “Travels and other Writings” William Bartram. 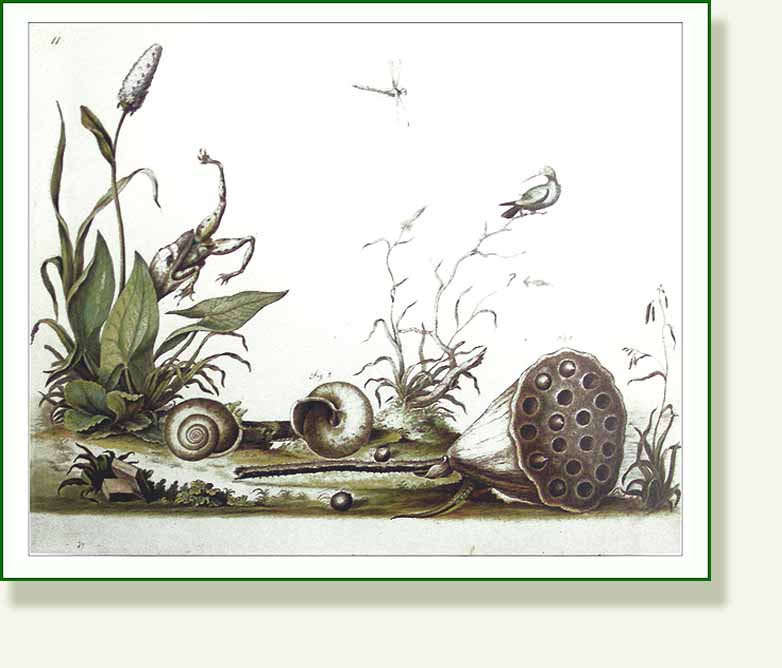