Leaf of the Day: Crown of Thorns

This is a very strange little plant. I saw it growing close by, in the border under the bauhini tree. Initially I had no idea what it was and kept this small piece here in the studio for about a week in water. It is so pretty and I am hoping to propagate it despite the thorns.
The drawing is in pen and ink and comes with a few sketches I had made on the side of the page. (..a bit like showing your workings in the old maths exams). The main drawing is done with a fine felt tip pen, the sketches on the side with dip pen and brown ink which I still prefer for its more expressive line.
Crown of thorns is a succulent, belonging to the Euphorbiacea or spurge family which also includes the poincettia, casava and the hevea rubber plant. (there is the most fascinating short article here about rubber.) Its Latin name is euphorbia milii.
Euphorbias appear to be named after Euphorbus a Greek physician to the interesting King Juba II (approx 50 BC to 19 AD) of Numidia a region of north Africa now Algeria. The “milli” after Baron Milius, who introduced the species to France in 1821.
As you can imagine it was thought to have been the plant used for the “crown of thorns” worn by Christ which may be, in part, because of its pliable stems but there are other contenders for that role.
The latex from the spurge family is toxic and can cause dermatitis, have stupifying effects if ingested, and as the name spurge implies, has been used as a purgative in medicine. It is just another delightfully dangerous addition to my growing list of poisonous plants .. the garden is a hazardous place and my enemies had best beware my newly acquired knowledge!
_____________________________________________ 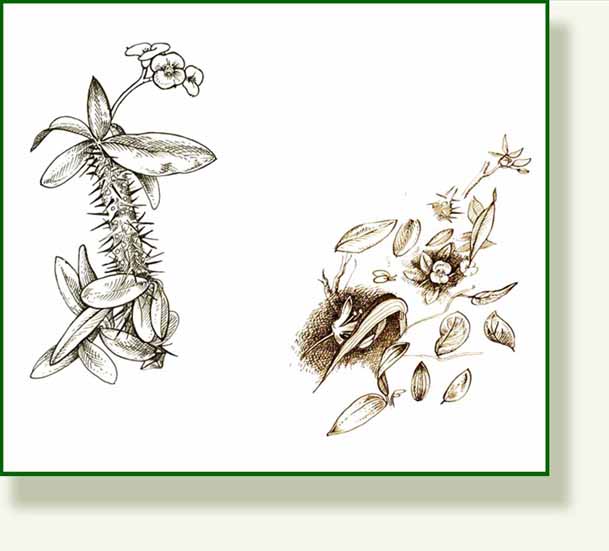